The new addition to the Disneyland Resort, Star Wars: Galaxy's Edge, has exceeded fan expectations. All of the reviews, including our own, have been a rave.

SAVE BIG ON YOUR DISNEYLAND VACATION! Our travel partner has huge savings for tickets and hotel to the Disneyland Resort. Save when you book both your hotel and tickets! Book Your Package Now>

To help get us hyped up for the next stage of visiting Batuu now that the reservation period is over, let's take a look at some awesome pictures of the new land that is going to make you want to visit right now!

She may not look like much, but she's got it where it counts, kid. Check out the first ever built to scale Millennium Falcon as the eye catcher in Star Wars: Galaxy's Edge. 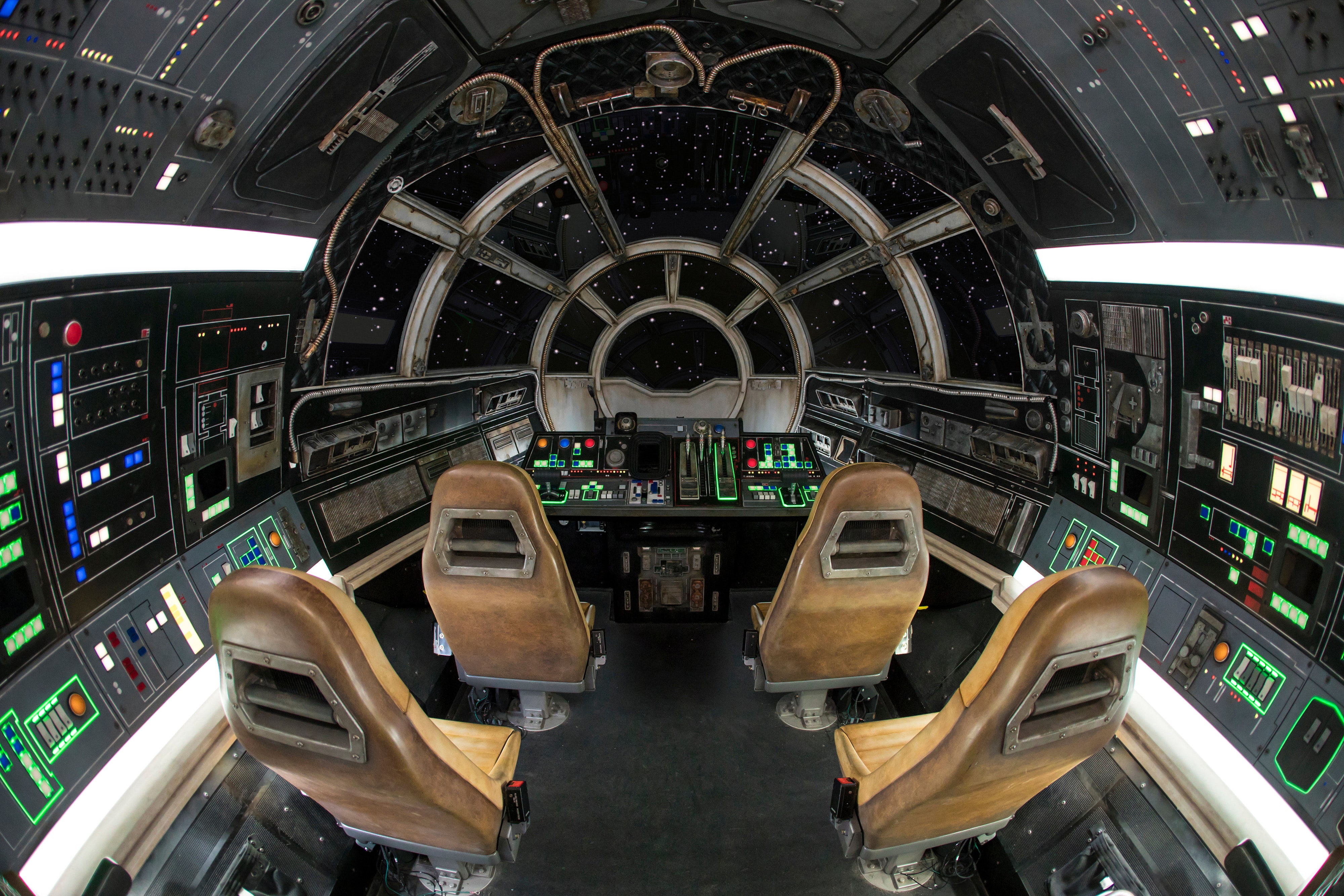 Here is the cockpit of the Millennium Falcon! Guests get assigned different positions such as pilot, gunner, or engineer which will then help guide your experience.

This is where you find the popular Ronto Roasters! Notice the attention to detail here- the droid is the same one burning the feet of another droid in Return of the Jedi at Jabba's Palace. And see what he's roasting the meats on? Yup, that's a podracer engine which are part of the vehicles used during Anakin's race in A Phantom Menace.

Hondo Ohnaka is there to greet guests boarding the Millennium Falcon! He's a fan favorite pirate from the animated series Star Wars: The Clone Wars and Star Wars Rebels.

5. Inside of the Millennium Falcon

Before you get on board the Millennium Falcon: Smuggler's Run, your group will get a chance to check out the inside of the fastest hunk of junk in the galaxy. This area is filled with small details fans will love, notice the Dejarik table (the one that looks like a chess board!) that we see Chewy and R2-D2 playing in A New Hope? And, much to the delight of fans, we see again in A Force Awakens?  You can also buy your own Dejarik table inside Galaxy's Edge.

Let's be real, we have to get our popcorn when visiting Disneyland. And even Star Wars land has you covered with a sweet and salty popcorn mix.

You can see the market here with all the stalls focusing on different merchants, their wares, and the backstories that come with them. Some of the shops have cool animatronics in their stores too! 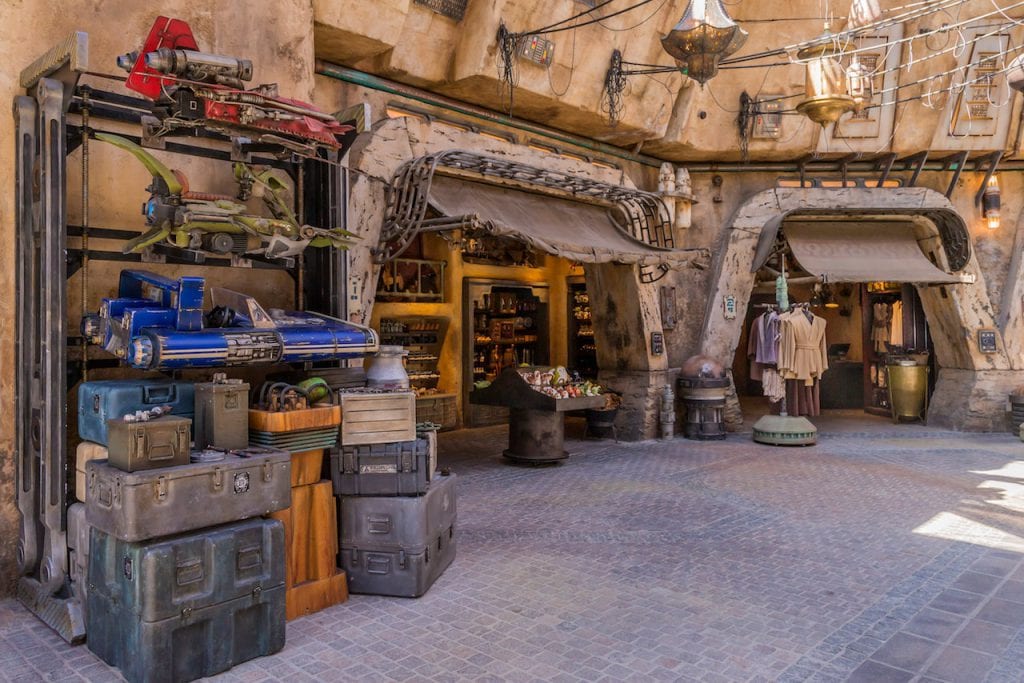 Here's a closer look at some of the market stalls in Black Spire Outpost. See the speeders on the left? The blue bottom one is a toy model of the Mobquet M-68 landspeeder we see Han driving in the beginning of Solo: A Star Wars Story. 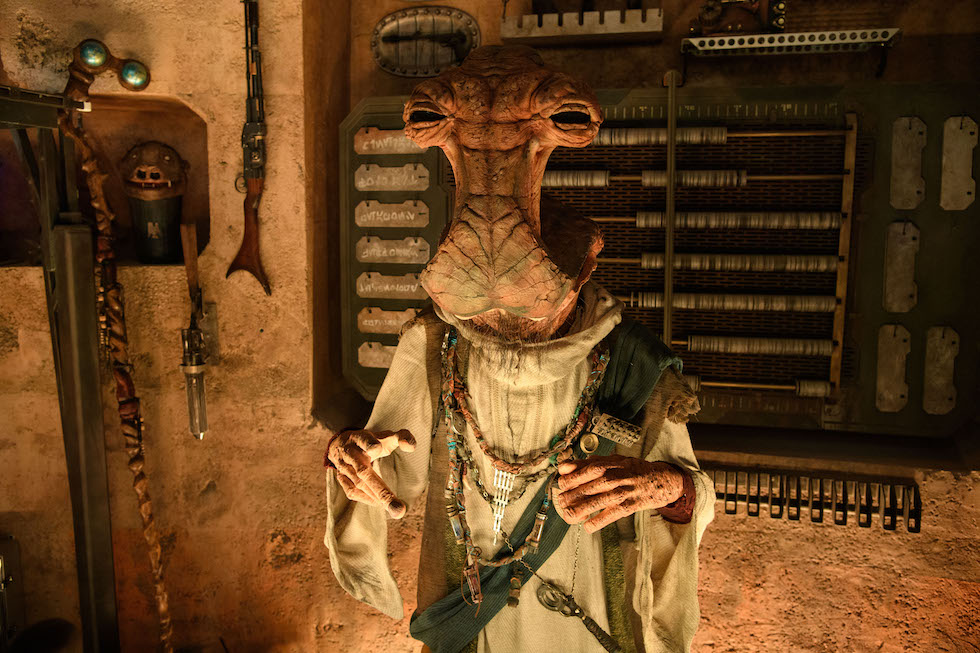 Speaking of out of this world animatronics, check out Dok-Ondar! You can find him behind his desk at his store- Dok-Ondar’s Den of Antiquities. You can read more about Dok-Ondar in his new comic series.

See Dok-Ondar back there in the far upper right corner? This store is a must for any Star Wars collector! It's filled with Star Wars Easter eggs too, I bet you can find some just looking at this photo. In fact, on the top right wall you can see taxidermy heads including a tauntaun and a nexu referenced in Empire Strikes Back and Attack of the Clones.

Coca-Cola teemed up with Disney to offer an unique design made just for Star Wars: Galaxy's Edge with labels written in Aurebesh- the Star Wars language you see used in the land. Cast members refer to them as thermal detonators! 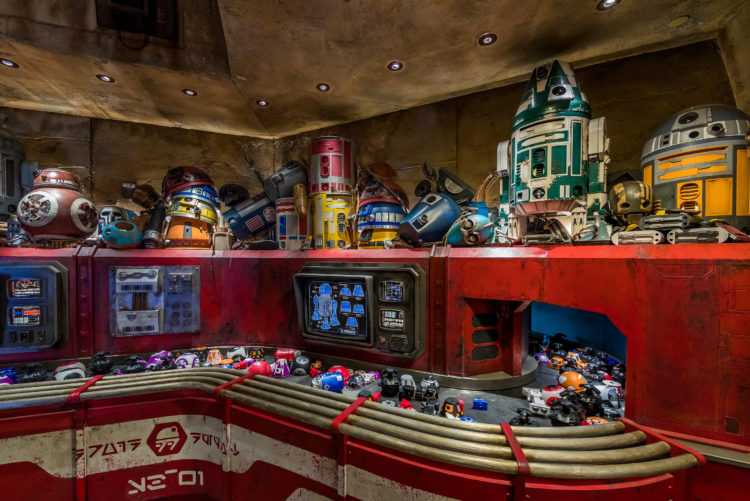 This is the place you build those droids you've seen blowing up your Twitter feed. The parts come out on a conveyor built and you grab the ones you want to make your own custom BB or R2 unit!

This store is much more than a store… it's a place for aspiring force wielders to become one with their new lightsaber. Build and customize your own lightsaber in an experience that you definitely should not watch on Youtube and just see for yourself. May the force be with you.

You can find the First Order wandering through the land spreading terror into the followers of the Resistance. None of the character interactions in the land are scheduled so you can randomly walk into stormtroopers, Rey, Kylo Ren, or even Chewy!

Our favorite retired pilot from Star Tours, DJ Rex, is bringing the beats over at Oga's Cantina. 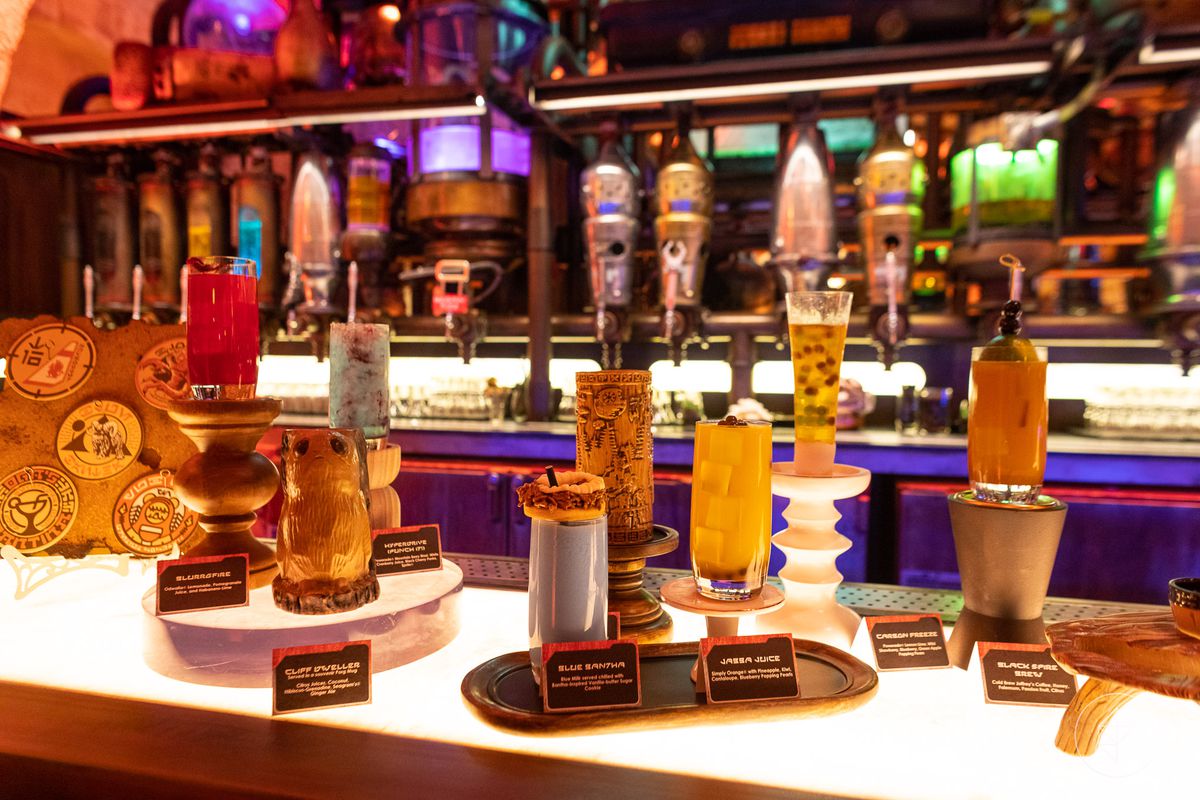 Oga's Cantina has been a hit inside Star Wars: Galaxy's Edge and is already one of the hardest places to get into! This is also the first place inside Disneyland to sell alcohol and some of these adventurous drinks are pictured above. 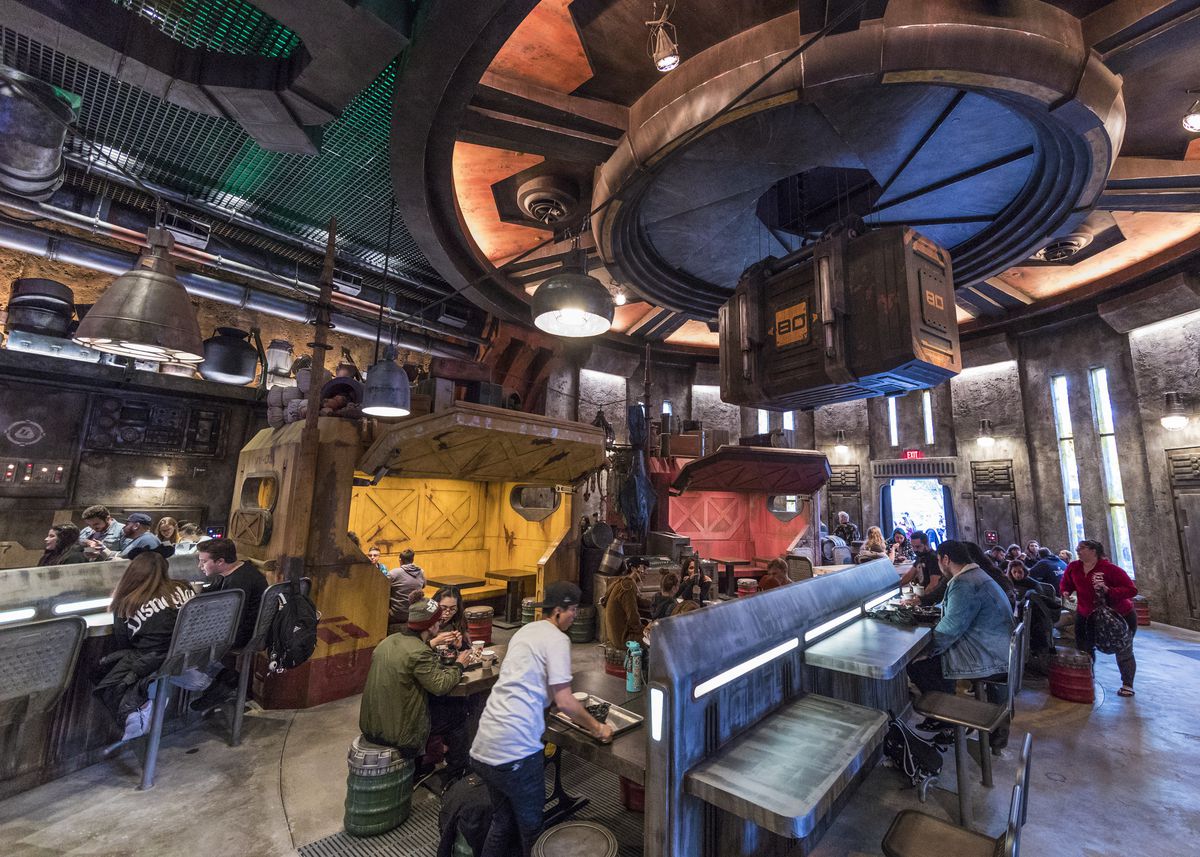 This is the main place you go for grub in Star Wars: Galaxy's Edge. The trailer-sized cargo pods are all numbered with three Star Wars Easter eggs: 77, 80 (pictured above), and 83. These are all the release years of the original Star Wars trilogy. 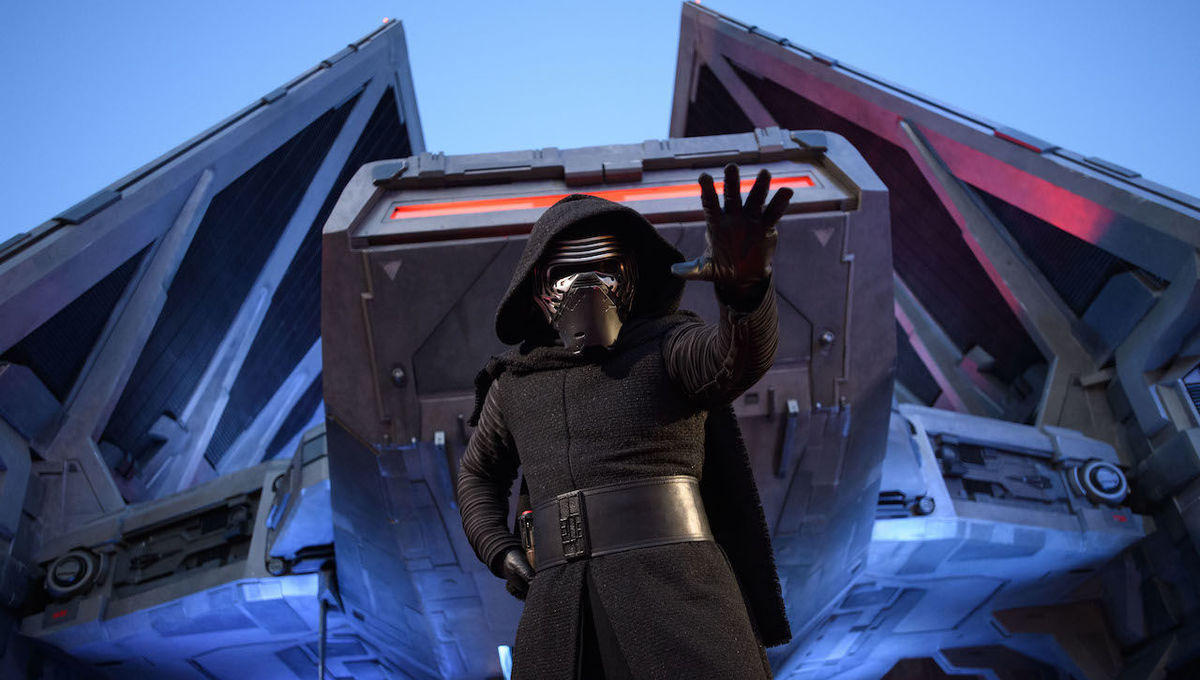 Guests looking for an intimidating encounter with Kylo Ren can find him throughout the day in front of his TIE Fighter in the First Order side of the land. 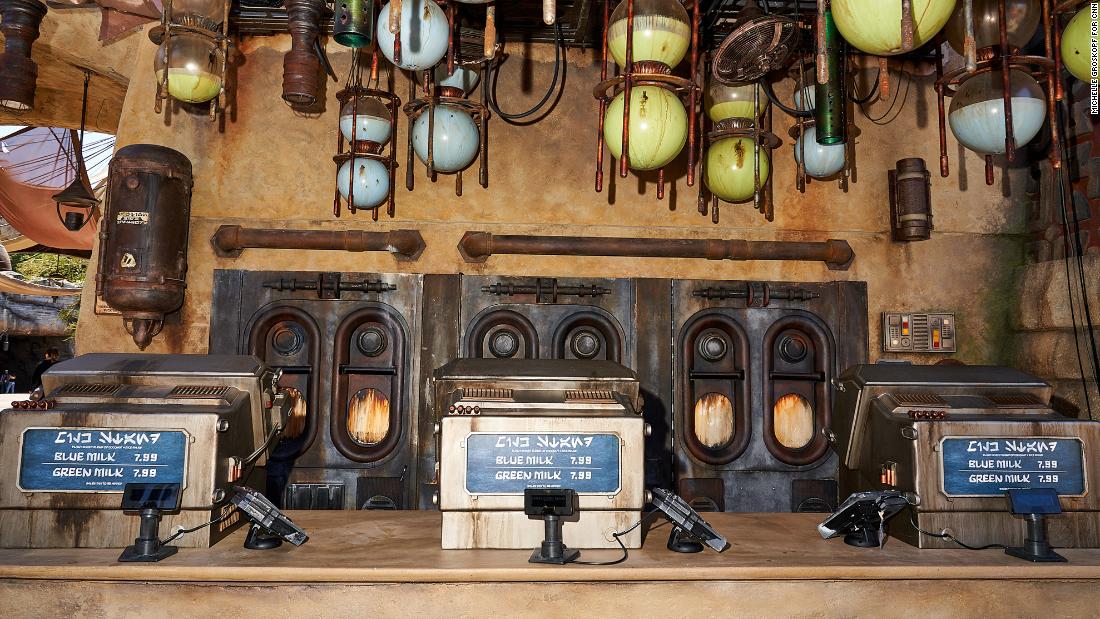 This is where you can find the coveted blue milk in Star Wars: Galaxy's Edge! See the blue and green milk above the registers? Yummy! We see Luke drinking blue milk in A New Hope and drinking green milk (that he milks himself from the Thala-siren) in The Last Jedi.

Star Wars: Galaxy's Edge is just as breathtaking at night as it is during the daytime. If you time it right, you can see the fireworks going off in Disneyland over the falcon when you're on Batuu.

Don't forget to read our MASSIVE guide about Star Wars: Galaxy's Edge including the best strategies to beat the lines, how to get your reservation to build a lightsaber, how to get into the cantina, and more!

Now is the perfect time to start planning your vacation! The best way to get started is by subscribing to our FREE deals newsletter here. Subscribers receive helpful planning tips, Disney deals exclusive to our readers, and access to the lowest-priced park tickets around. Check out our other helpful resources for planning your trip:

Next Post: 15 Common Mistakes to Avoid on Your Disneyland Vacation