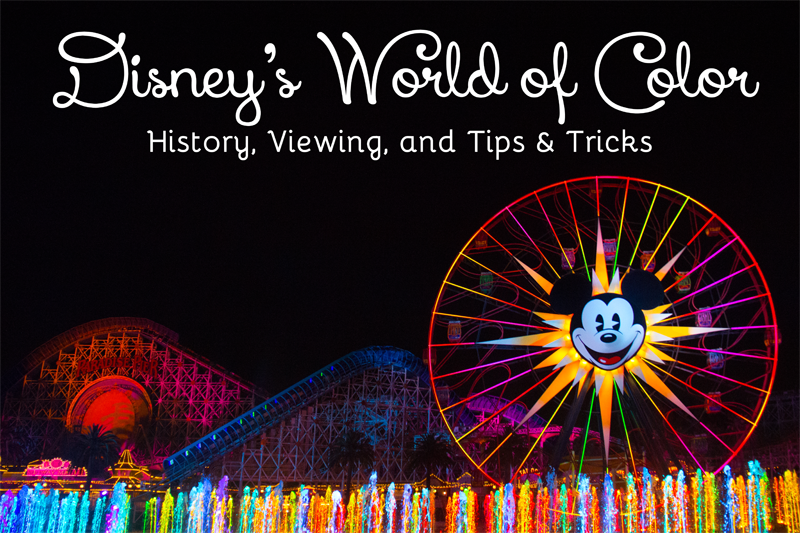 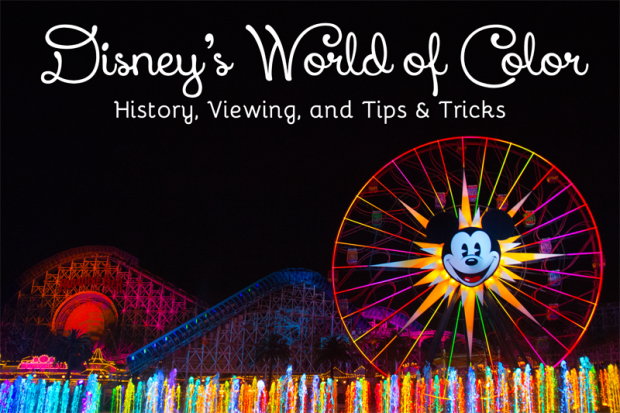 Disney California Adventure’s newest evening show has been labeled many things including “Amazing” and “Disney’s best show, yet.” Most importantly, it has been considered “not to be missed.” Today we’re going to take an in-depth look at the history of the show, the show itself, and how to obtain the best seating possible.

World of Color – the History 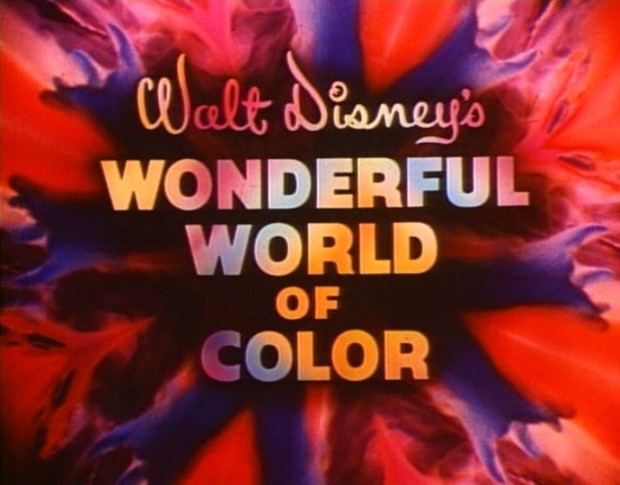 Walt Disney’s Wonderful World of Color ran from the late 50’s into the late 60’s and became the high point for many Australian families week after week – beginning with Walt himself singing “When You Wish Upon a Star.”

Looking back, it was very much a barefaced advertisement for Disneyland as each week they concentrated on one of the park’s various “lands.” The IMDB profile provides great information on the show and the various episodes that were released.

It seems fitting, therefore, that the newest night time spectacular be named after what is known as one of the longest-running weekly prime time network shows in the history of television.

When Disney California Adventure opened the newest park on February 8, 2001, it wasn’t as successful as hoped. They had planned for tens of thousands to visit for the opening day, but only a few hundred arrived.

Due to a soft opening for annual pass holders, word spread online through a variety of Disney and theme park discussion forums. They said less than becoming things of the park for weak theming, unexceptional finishes, and common rides, causing the ultimately depressing attendance once the park opened officially.

Disney management tried some smaller fixes to the park before 2007, when new Disney CEO Bob Iger announced a $1.1 billion makeover and expansion of the park including the opening of a new park entrance plaza, Cars Land, and the World of Color water spectacular.

Creating the World of Color show in Paradise Bay

Brought about by Vice President of Parades and Spectaculars, Steve Davison, and outlined by Walt Disney Creative Entertainment, the show has almost 1,200 fountains and incorporates lights, water, fire, haze, and lasers, with high-definition projections on mist screens. Mark Hammond and Dave Hamilton masterminded the music, which was performed by the London Symphony Orchestra and The Nashville Choir. 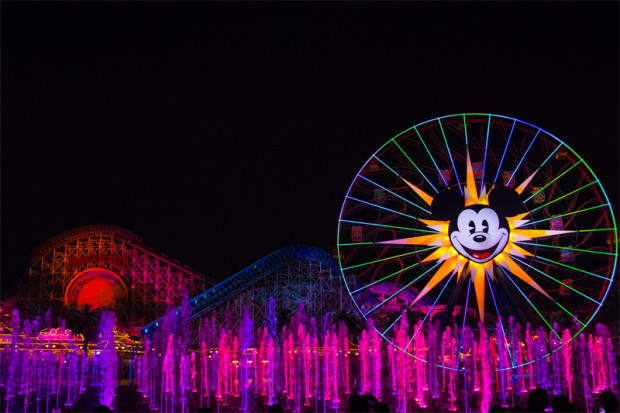 The entire show cost US $75,000,000 to design, manufacture and build. The process of bringing together, set up, and testing the show's numerous components and equipment in Paradise Bay spanned a period of approximately 15 months. It premiered on June 11, 2010 as part of “Summer Nightastic!”

Video of World of Color

Here is a video of the show from YouTube, dated May 2, 2013. Please note the actual live show is always being changed and updated and may not match this video.

There are a few ways to see the show. We review one that is free with admission, while the other charges a premium for reserved seats.

The show’s viewing area is located in Paradise Park: the tiered garden area directly in front of The Little Mermaid ~ Ariel’s Undersea Adventure.

You WILL get wet viewing the show from the front deck. Bring along a poncho if this is a concern. (Unless the wind is blowing strongly in your direction, you shouldn't get “Grizzly River Run wet,” but you might get more than “Splash Mountain wet,” so a poncho is a good idea!) Again, the view is so much better from the front deck that we believe the improved view is well worth the inconvenience of the poncho! (Inexpensive ponchos are available at the Target store south of the park on Harbor Blvd, if you didn't happen to purchase these before your trip.)

Amazon sells really cute Disney themed ponchos that are perfect to take to the parks. 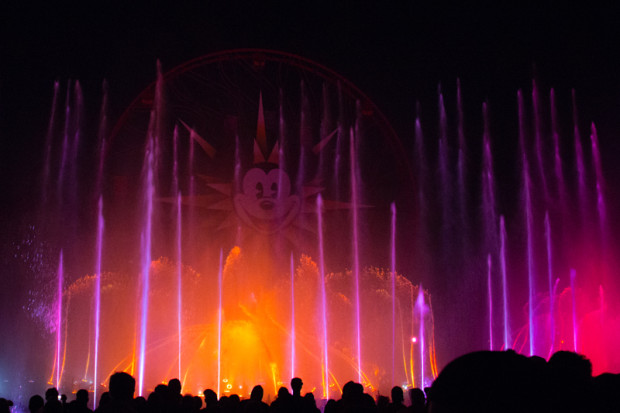 Unless you want to arrive late in the day, you don't have to buy one of the dining alternatives to view the show, unless you wish to dine at one of these restaurants regardless of the show. The viewing of the show is no better with the “dinner combination” than with the Fastpass alternative, which is free.

Plan ahead to save a spot inside Paradise Park at Disney California Adventure park to watch “World of Color.” Passes are accessible on a first-come, first-served served basis. The FASTPASS kiosks are located outside Grizzly River Run in the Golden State area of the park. Keep in mind that each part of your group must enter Disney California Adventure Park and present their tickets at the FASTPASS station to accept a FASTPASS.

Bonus tip: Guests staying at Disneyland Resort Hotels can use Extra Magic Hour on select days, throughout which time you may enter Disney California Adventure park one hour prior to when it opens to visitors. Take advantage of this additional time by grabbing your “World of Color” FASTPASS

There are two different color-coded FASTPASSes that are issued for World of Color, Blue and Yellow. Each one relates to an alternate viewing area for the show, keeping in mind the Yellow viewing area gives you access to the front and center view. Yellow FASTPASSes are given out AFTER all of the Blue FASTPASSes have been issued for the day.

In the event that you wish to acquire a Yellow FASTPASS for the early show, on a typical summer day it is recommended that you acquire your FASTPASS around 12:30pm or 1:00pm, or between four and a half and five hours after the park has opened for the day. (You'd need to check sooner than this throughout the busy season of the year, for example, throughout the Christmas season, spring break, or Fourth of July week, and later throughout less-occupied seasons.) The trick is that you need to hold up long enough after the park has been open that the blue FASTPASSes have all been issued, yet not all that long that the majority of the Yellow FASTPASSes are distributed for the day. In the event that you touch base at the FP machines and observe that they're still issuing Blue FASTPASSes, we propose returning later after they've switched to Yellow before acquiring yours. Once more, the Yellow FASTPASSes should provide for you get to the up-front and center view range. 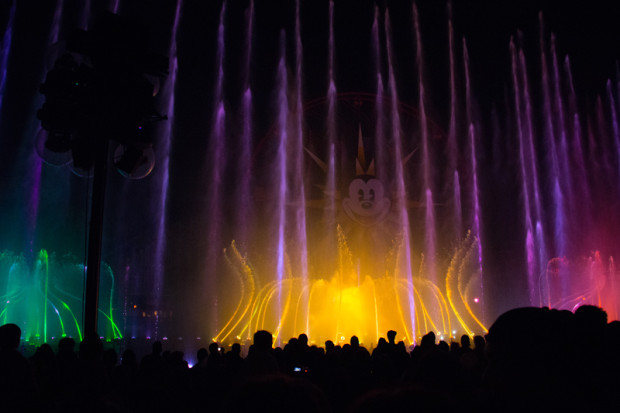 Not a morning person? Love excellent food? This is the alternative for you. Notwithstanding enjoying an amazing meal, you additionally get access to a reserved viewing in Paradise Park to delight in “World of Color!”

The experience beings with dining at one of three locations and continues into the preferred viewing area for the popular show.

Included in Each World of Color Dining Package:
• Full-service, 3-course (starter, entrée and dessert) meal from a prix-fixe menu during lunch and/or dinner (depending on the location) from one of 3 participating restaurants
• A non-alcoholic beverage
• One voucher that reserves, in advance, your spot in the Paradise Park preferred World of Color viewing area
You should know: dining packages do not include park admission, tax, gratuity or alcohol. Also, the preferred World of Color viewing area is in Paradise Park, separate from the dining location.
Approximate Prices for the Dining Package: (From the Disneyland official website)

See our review of the Carthay Circle Restaurant World of Color package here.

Reserve your spot early by calling 714-781-DINE to enjoy lunch or dinner at Wine Country Trattoria or Carthay Circle Restaurant, or dinner at Ariel's Grotto on select nights all through the summer season, followed by reserved seating for “World of Color.”

Updated Menus may be found at Touring Plans or All Ears.

Previous Post: Alice in Wonderland Attraction Before and After Refurbishment Photos and Videos