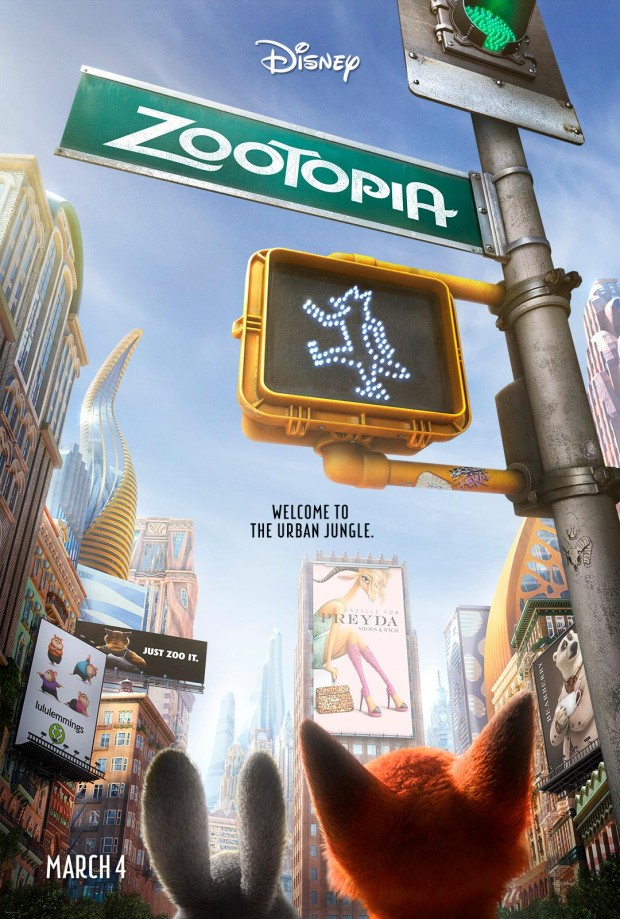 ‘Zootopia' is part parable, part action-filled adventure, part female empowerment, and all together is a heartfelt animated feature that immediately joins the top film ranks of ‘Beauty and the Beast,' ‘Monster's Inc,' ‘Aladdin,' and ‘Toy Story.'

I unequivocally suggest that all people see this film. I highly suggest you refrain from reading any more of this review or any others on the web if you have not yet seen the film. Part of the reason I enjoyed ‘Zootopia' so much was because I avoided learning to much before hand and stopped myself from having high expectations.

It has now be an entire week since I first saw ‘Zootopia.' Over the course of that week the film has not left my mind for longer than a few hours. It is impressive that an animated film has stayed top of mind for such a long time after. Furthermore, I wasn't just thinking of the enthralling story elements or stunning visuals, I was dissecting the story and applying the deeper elements to our own world.

Similar to the positive messages on love presented in ‘Frozen,' this new film offers a teachable moment for those who want to dive deeper into the story. Hidden beneath the storyline of ‘Zootopia,' lies an examination of the “why?” behind the the prejudice of our society. I don't want to dive too deeply into a full analysis before you have seen the film for yourself. Part of the reason I enjoyed ‘Zootopia' so much was because of my low expectations. In the weeks to come I hope to analyze the film even more deeply. Forbes gives a nice dive into this side of the film if you would like more information now.

Not only does this story provide a cultural context on a deeper level, but it serves as a thrilling tale that is fun for all ages. The youngest members of the family will enjoy the surface level story of a young female bunny (voiced by Ginnifer Goodwin) going to the big city to live out her dream as the first bunny cop. While there she has a run in with a fox (Jason Bateman) who then gets roped in as her partner. This “cute” bunny and a “sly” fox save the city and in doing so break their assigned stereotypes.

Or maybe you will enjoy the new hit song “Try Everything” as performed by Shakira while playing her role as the hit superstar Gazelle. The song has just enough repetition and is played enough times in the film that I can't imagine you will walk out of the theater without having this tune stuck in your head.

Others will enjoy the incredible details and animation that went into creating this multi-tiered world inhabited by animals ranging from shrews to elephants. Even though we only see a select chunk of the city of Zootopia in the film, you can tell that this world stretches out much farther than the edges of the screen. In fact, so many people have been inspired by the graphics of the film in the trailer and in the film that one of the top searches on Google is “Zootopia Pixar,” while the film was actually a Walt Disney Animation Studios film. This acknowledgement by the public is another sign that the animation team down in Burbank continues to up their game and is now on an almost level playing field with their friends up in Emeryville.

Overall  I unequivocally suggest that all people see this film. No more review needed.

As audiences prepare to see ‘Zootopia' this weekend, the film continues to hold over a 95% score from both critics and audience members on the Rotten Tomatoes Tomatometer. The film is predicted to have one of the largest openings for Walt Disney Animation Studios ever. Box Office Mojo has predicted that by the end of the first weekend, the film will hit $72-73 million dollars, breaking the March animation record and surpassing the opening weekend of blockbuster, ‘Frozen.'

You don't want to miss this film. For more film reviews and news about Disney and Disneyland, be sure to subscribe to our newsletter.