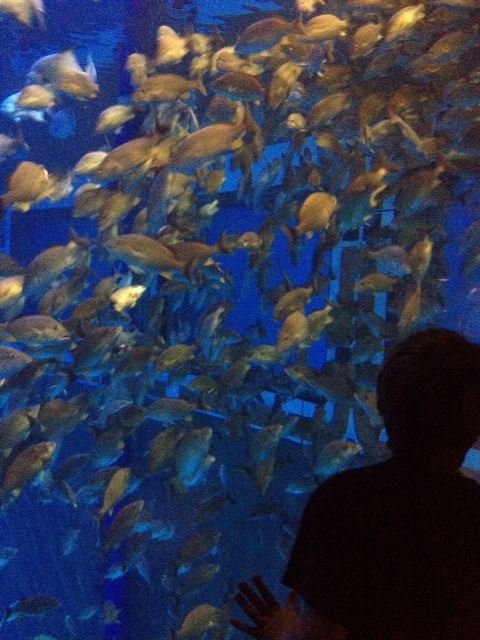 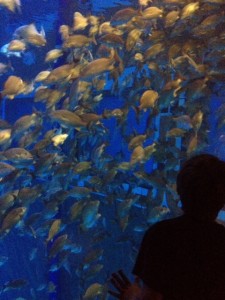 Being a mom, as well as a teacher, inspires me to look for the educational benefits of any trip to Disney.  A visit to The Living Seas in Epcot provides the balance of education and fun while still enjoying the Disney details.  In one morning, my family learned about Disney's conservation efforts of manatees, witnessed the intelligence of dolphins, learned about sea horses and their babies, how a plastic bag looks similar to a jellyfish, and how Disney keeps the sharks from eating the other fish in the tank. 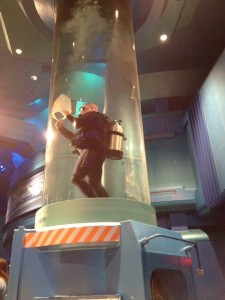 There are currently two manatees in the manatee tank.  Both were injured by boats, rescued, and taken to Disney World to recover.  My kids learned that there is not a precise feeding time for the manatees because they constantly graze on lettuce during the day.  The cast members in the upstairs manatee viewing area are quite knowledgeable and are excellent for answering questions about the manatees, their habitat, and Disney's efforts to protect them.

After living here a year, my family finally got to see the Dolphin Show in the aquarium for the first time.  It happens twice each day and the times are posted at the entrance of the aquarium.  Dolphin trainers work with the mammals each day on cognitive and physical skills in order to keep their mind and body in tiptop shape.  One of the exercises is the same and different test.  Shapes are placed on two windows of the aquarium and the dolphin is instructed via sign language to find either the same or different shape on the other window.  If the dolphin chooses correctly, a whistle is blown and the audience cheers.  If the dolphin does not choose correctly, it goes back to the shape on the first window and then tries again.  The entire show lasts less than thirty minutes and is a great way to teach your children about dolphins right there on Disney property. 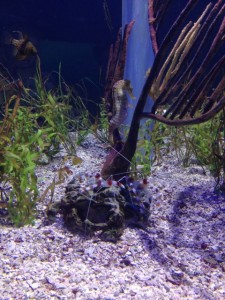 Did you know that it is the daddy sea horse that carries the babies? If not, you definitely need to check out the animals in The Living Seas.  Lately, there have been numerous sea horses dragging their swollen bellies across the rocks at the bottom of the tank while others hang onto the twiggy plant life as well as each other.  Don’t worry; it does not seem to hurt them at all.  Maybe it scratches an itch they just can’t scratch with their tails.  It is awesome to see the other sea horses “carrying” each other around the tank. Sometimes it takes two sea horses to carry the baby-carrying sea horse around.  In the same area, guests can see eels, crabs, starfish, poisonous fish, and other sea life. 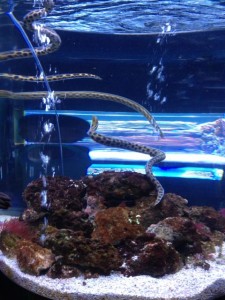 In the wide-open area on the downstairs level of The Living Seas is an airlock chamber for divers.  Despite the lack of a sign, a great lesson takes place right there at the airlock chamber.  While a cast member talks to the audience and picks one lucky guest to help, there is a diver in the airlock chamber.  His or her job is to follow the sign language signs for diving, demonstrate basic diving techniques, and teach guests about the dangers of water pollution.  Once the airlock chamber has filled with water and the diver has risen up into the water, he or she pulls out a plastic grocery bag.  The cast member on the outside asks the audience what it is and what animal it looks like.  A jellyfish.  As the light bulb turned on in people's heads,  I realized that my family just had another teachable moment at Disney without even knowing it. 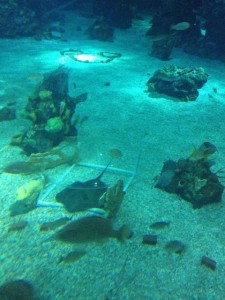 One of my favorite lessons at The Living Seas is the fish feeding, which happens multiple times during the day in the aquarium.  My favorite seat, if you can call it that, is where the “Hidden Mickey” rock formation is on the right hand side.  The enclosed staircase is behind you, the Mickey shaped rock formation and a plastic dome is in the aquarium in front of you.  Animals are wise creatures that quickly learn where and when the food will show up.  That clear small plastic dome fills up quickly with eager sharks and stingrays when it gets closer to feeding time.  The best feeding time is the first one of the morning.  That seems to be when most of the animals are fed, including the larger ones like the shark and stingray.  In order to keep the sharks from eating the other fish in the tank, the cast members feed them fish that is not found there.  That way everyone and everything in the tank smells like friends and not food. 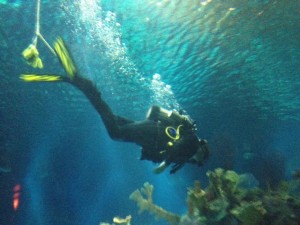 The educational aspect of The Living Seas and other Epcot features gives families an opportunity to learn something while having fun, which was one of Walt Disney's hopes for Epcot.  I really enjoy going to The Living Seas with my family and learning more about marine life, conservation, and other inhabitants of our planet.  I don't have to lecture about littering, helping animals, or protecting nature because Disney already does that in a fun way.  I can see the difference it has made in my children each times we visit a resort, a park, or even off property because they pick up trash without being told and tell cast members if there is trash in a lake on property.  Thank you Disney for continuing to educate my children even though they think they are taking a break from “school.” 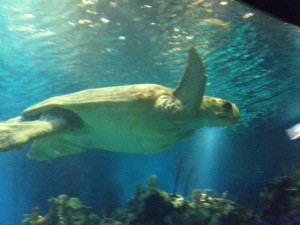