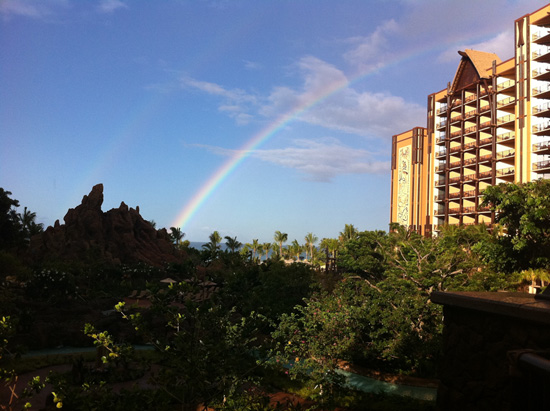 The resort, was inspired by Hawaiian heritage and tradition, and local architects, artisans and historians helped to incorporate that spirit into Aulani.

Aulani traditionally means “a messenger of a chief – one who delivers a message from a higher authority,” Joe Rohde, senior vice president, Creative for Walt Disney Imagineering, said in a press release. “The name Aulani was chosen to position the resort as a messenger of the “higher authority” that is Hawaii, its spirit and its culture.”

Aulani doesn't skimp on the amenities: four restaurants, two lounges, an adult spa, a separate teen spa, fitness center, kids' club and a large pool area featuring a private snorkeling lagoon and a conservation pool where guests can get up close and personal with sea creatures like stingrays, anemones and starfish.

Activities happening around the resort include movie nights, fireside storytelling, hula dancing, Hawaiian sunset ceremonies, cooking classes, surf lessons and, of course, Mickey and company will be around too.