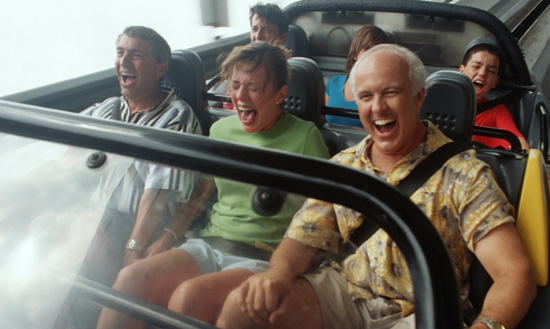 After the previous redesign of a few vehicles on Test Tack, Walt Disney World has announced that the attraction will be getting an overhaul this year, confirming the previous rumors.

Starting this fall Test Track won't have you testing out safety features rather it will have you test out design elements. The queue will be themed around Chevrolet Design Center. Test Track is scheduled to close in April 2012 to make way for the new experience, which will gives theme park guests the active role of “becoming” automotive designers.

Even though the name “Test Track” is likely to stick around, the experience is changing. The new version of the attraction will have“upbeat music, engaging media, dramatic lighting and a collection of Chevrolet concept cars and model vehicles.” Guests will use interactive design and styling workstations to create custom concept vehicles, after which they will hop aboard a 6-person “SimCar” ride vehicle and test out the design through the twists, turns, and bumps of the Test Track course. It seems like every single ride that is being added to any Disney Park just HAS to be interactive in some way so Test Track will now feature interactive games in the queue. After the ride, a new post-show area will feature special effects and scores on how well their custom concepts did. Chevrolet vehicles will also be on display in a new state-of-the-art showroom.

To make the update happen, Disney and General Motors have renewed their long-term business relationship with a new multi-year corporate alliance. GM will be actively involved with Walt Disney Imagineering in the development of a re-imagined, design-centric Test Track experience.

“We are excited to renew our long-term alliance with General Motors,” said George Aguel, Senior Vice President, Corporate Alliances for the Walt Disney Company. “This unique agreement extends collaboration between two of the most recognized brands in the world, a relationship that spans over 30 years. The re-imagined Test Track Presented by Chevrolet will continue our shared goal of providing unique and innovative experiences that engage Disney guests in exciting and interactive ways.”

“As a global brand, Chevrolet is looking forward to welcoming Guests from around the world to the re-imagined Test Track,” said Joel Ewanick, Global Chief Marketing Officer for General Motors. “The best of Disney and the best of Chevrolet will come together to bring Guests an immersive experience in the design process of the vehicles they see on the road today and will see in the future.”

Fans of the current Test Track still have a few months to get their “rough road tests” in before it closes to be re-imagined into the new experience.

Update: We are a week away from the opening of the new Chevrolet Design Center version of Test Track and Disney released a picture of the costumes that the Cast Members will wear while on stage at this attraction.

Next Post: First Disney DVD Releases for the Year