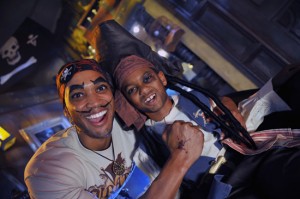 According to legend Captain Jack Sparrow is looking for a crew and he decided not to head to Tortuga to look for it, he decided he could find even more pirates at the Disneyland Resort.

The Pirates League, the popular experience that transforms guests into pirates, will be moving into Disneyland. Previously the experience could only be found in Walt Disney World or recently the Disney Fantasy.

This September the Pirates League will be taking up residence in the Court of Angles in New Orleans Square in the Disneyland Park.

At the Pirate League guests ages three and up will receive “their own pirate look and name, training them to swashbuckle and teaching them the official Pirate League Oath”

The three different packages available are Jake and the Never Land Pirates(modeled after the popular Disney Junior show), First Mate and Empress, designed specifically for young pirate princesses. Packages will range in price from $29.95 to $34.95.

The Pirate League will only be in Disneyland for a limited time starting in September, but guests can call (714) 781-STYLE beginning August 7 to make reservations for this makeover fit for a landlubber.