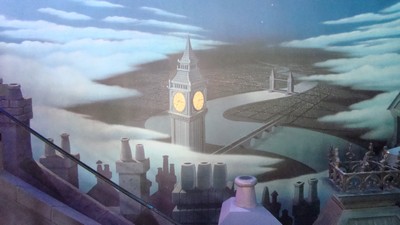 On Tuesday of this week, Disney released the 60th anniversary Blu-Ray Diamond Edition of it's animated movie Peter Pan

. Originally released on February 5, 1953, Peter Pan is on the short list of Disney's most classic and endearing films. I might even have to order a copy of the new release on Amazon and I'm not a huge fan of many of Disney's animated films (I know that is sacrilegious to many who read Disney websites but some Disney's movies I find  just too intensely sad in parts to really enjoy them). It's been many years since I've seen the movie but it's seemed to me that Peter Pan was different, a movie that soared with imagination and adventure rather then dealing with life's tragedies. 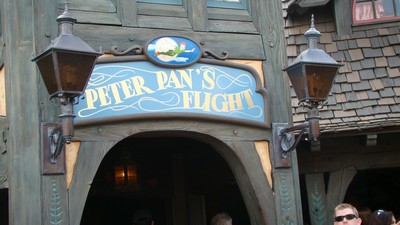 Which brings us to Disneyland's Peter Pan's Flight. If someone were to ask me what one ride best represented the true heart of Disneyland as Walt conceived the park, I would have to pick Peter Pan's Flight. No it isn't the best ride, or my personal favorite, but it is the absolutely the quintessential Disneyland attraction – a well conceived, well executed ride based on one of Disney's best movies.

Some people criticize Disney for building rides based on popular movies rather than relying on original ideas (like Pirates of the Caribbean or Haunted Mansion) but when the ride is as well executed as Peter Pan's Flight, I have no problem with movie based rides at all.

Peter Pan's Flight was operating when Disneyland opened on July 17, 1955. In the 58 years since that time, the popularity of the ride has never wavered. It remains one of the park's most popular attractions and also one of the park's most frustrating attractions. There is always, always, a line to get on Peter Pan. You could get to Disneyland first thing in the morning, be right in the front when the rope drops, and unless you have sprinter's gold medal speed like Usain Bolt, by the time you get to Peter Pan, the line will have already started to form.

Within 10 minutes of the attraction opening, the line to get on is probably already 15 minutes long and just continues to build from there.  Oddly enough, the ride doesn't often get above a 45 minute simply because, there is no room for an extended queue line in its cramped location and when people see the mass of humanity standing out in front to get on, many just pass right on by hoping to catch a break at a later time. 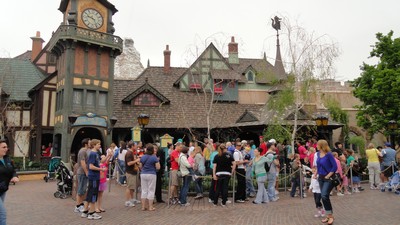 People waiting to get on Peter Pan's Flight

Many have asked why isn't Disneyland's Peter Pan's Flight a Fast Pass attraction like it is in WDW Magic Kingdom. I don't have the official answer but the only thing I can come up with is the ride and its loading area is in such a confined space there just isn't enough room to manage separate queue lines or have a close by Fast Pass distribution area. The line tends to max out and stay there throughout the day. There's not a whole lot of people, especially families with very young children, willing to wait more than the 45 minutes give or take for what is a very quick (about 2 minutes and 30 seconds) Disneyland dark ride, even one that is as well done as Peter Pan's Flight. It's just too easy to walk over the nearby Snow White, Pinocchio, or Mr. Toad dark rides instead where the line is generally much, much shorter (Alice in Wonderland can be a longer wait but not as long as Peter Pan).

By Disneyland standards, Peter Pan's Flight is known as a slow loader which contributes to the line. I believe the ride only handles in the neighborhood of 600 – 800 people an hour (compared to something like Pirates or Haunted Mansion which run up in the 3000 people per hour territory). But for those who wait, they are treated to something very special. Rather than scooting along on some track driven ride vehicle on the ground, Peter Pan's Flight suspends you from the air giving the illusion of flight over the scenes from the classic story.

And for the most part, it does a very good job with the illusion of flight through darkened rooms and the detailed scenes. My biggest criticism of Peter Pan's Flight (other than waiting in line) is that the ride moves much too quickly to really admire the level of detail. I also wish the audio track and music were a bit more dynamic. Though its been a few years since I've been on the ride it seems to me the ride sounded old (given that its almost 60 years old, to be expected I suppose). Just wish there was a bit more sparkle in the sound. 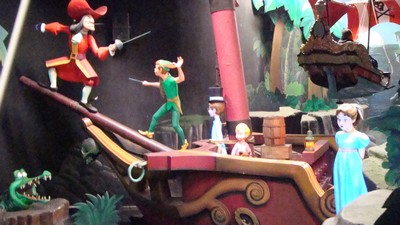 Scene from Peter Pan's Flight with the lights on.

Peter Pan's Flight just happens to hold my personal record of the ride being stuck on the longest, probably in the 20 to 30 minute range. One rain drenched day with a howling wind, an emergency exit door blew open which shut down the ride dead in its tracks and flipped on all the lights. The ride shutdown occurred in the blink of an eye. So by the time the ride mechanics came by to make sure the door was fixed and secure, cast members personally inspecting every room to make sure no one had jumped the ships and were wandering around the ride, and power cycled the ride back into operation, it was a pretty good wait to be suspended about 20 feet in the air. All I kept thinking to myself was “if they can't get this ride restarted, they're going to need a pretty long ladder to get me out of here. I hate ladders.” Our bonus for the inconvenience of being stuck on Peter Pan's Flight? Hop on and take another ride – no wait. PS. You will never truly appreciate the illusion of a ride that runs in the dark until you see it with the lights on. Completely different experience. 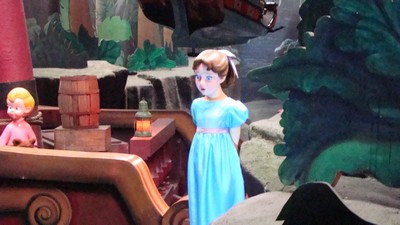 I could easily pass on all of the original Fantasyland dark rides – Mr. Toad, Snow White, Pinochio – because they are extremely short in duration, offer little in terms of entertainment value (a personal opinion), and all seem to be variations of each other. Alice in Wonderland is a bit different but that ride was not part of the original park opening (coming 4 years later in 1959), has an elevation change (runs mostly above Mr. Toad), and has a outdoor section.

The rule of thumb my wife and I have is we go on all the Fantasyland dark rides about every 4 or 5 years and that's usually to remind ourselves, we aren't missing out on that much. The exception is Peter Pan's Flight which stands head and shoulder above any ride in Fantasyland and goes toe to toe with any ride in the park. Unless your are one of those who don't count rides as great unless they make you scream, Peter Pan's Flight defines Disney greatness. Good things sometimes come in small packages and Peter Pan's Flight in Disneyland is simply a jewel. 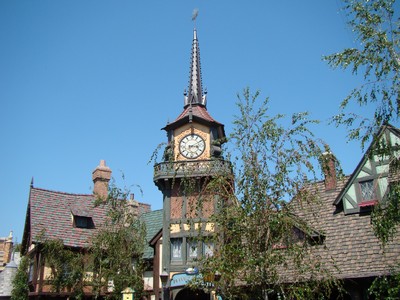 60th Anniversary addition is a masterpiece that I suggest everyone adds to their movie collection.

Previous Post: Bad Day at Disney – The Other Side Of The Mouse

Next Post: Legoland Florida: A Park Just A (Long) Block Away From Disney World