Our beloved Mary Poppins flies back into theaters in Mary Poppins Returns this holiday season. The film is a return to the magical world of Cherry Tree Lane and this alone should make you want to see the film.

Utilizing the beats of the original film, the filmmakers have created a fun filled musical featuring the memorable lead character. Set a short 25 years after the film, Jane and Michael Banks have grown up and Michael has children of his own. After the passing of Michael's wife, the family has fallen on hard times and only a little magic can help to prevent the family from losing their home. Of course, Mary Poppins arrives at just the right moment. There is joy in seeing the way that matured adult Michael and Jane react to the return of their fantastical nanny all the time questioning if their adventures as children had actually occurred.

SAVE BIG ON DISNEYLAND PACKAGES! Our travel partner has huge savings of more than $500 for travel January-June. Save when you book both your hotel and tickets. Save big and buy now! Book Your Package Now>

Emily Blunt does a superb job stepping into the lead role and honors Julie Andrews' original performance while building upon the character. She take the character is a quirkier and more stern direction, but brings the whole thing home with the warmth she reveals to the audience. Lin Manuel Miranda, of Hamilton fame, took the place of Burt as the sidekick character to Mary. The two come together in a number of musical numbers that take full advantage of their range. 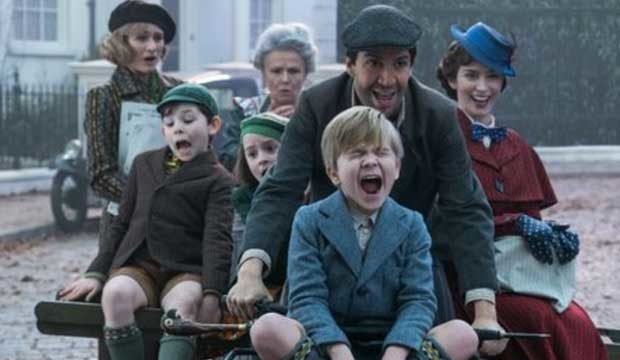 Throughout the film you'll feel almost as if you are watching the original with new songs. The beats and timing throughout are similar and the songs even follow similar music cues with the same note leading into the opening song that opened the original film and some chords from “Let's Go Fly a Kite” playing in the background of the final song. To some this may feel like too much reliance on nostalgia, but I wouldn't have it any other way. These homages to the original made me feel at home and allowed me to be swept up into the world again completely.

The capstone for this nostalgia was a brief appearance of Dick Van Dyke playing the elder bank and repeated appearances by the now ancient sea captain and first mate who live next door on Cherry Tree Lane that are still blasting off their cannon on the hour.

The songs throughout the film were not instant classics like the Sherman Brothers hits from the original, but I did really enjoy “Can You Imagine That” and “The Place Where Lost Things Go”. Both these songs and the remainder of the soundtrack were a nice fit for the film–though one or two could have been cut as the film clocks in at over 2 hrs 12 mins and drags a bit in final quarter of the picture.

Overall I highly recommend a trip to the theater to check out Mary Poppins Returns. While nothing will ever take the place of the original film, Emily Blunt and the directing team did a great job returning the warmth and joy to the big screen. If you have not yet seen the original, take the time to watch it before you head to the theater.

Don't forget to sign up for our Disney newsletter below for the latest in tips, secrets, photos, and reviews!

Previous Post: 30 Christmas Pictures of Disney Parks Around the World: Get in the Spirit of the Holiday Season

Next Post: 15 Pictures of the Disneyland Resort during the Holiday Season