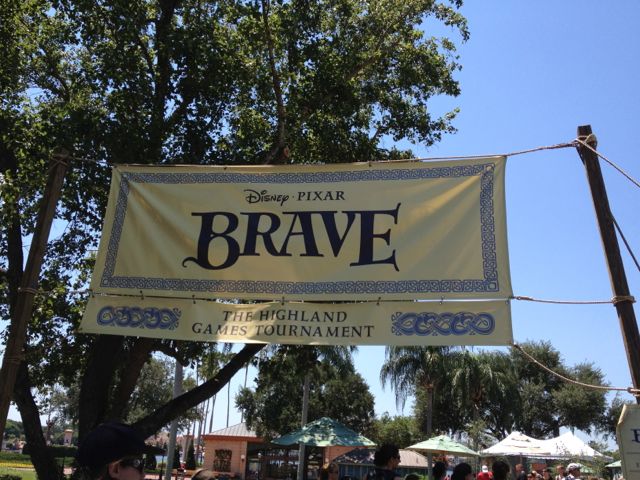 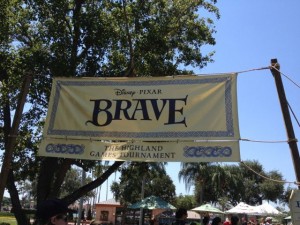 Before guests can participate in the Highland Games Tournament, they must spin the wheel and pick the clan they are representing. 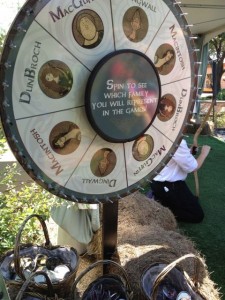 With the luck of the Scottish, my family all spun Clan DunBroch.  There were three games to participate in as well as an elaborate sand display and crayon rubbing. 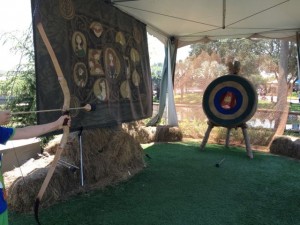 Archery is not as intimidating to my children as it first once was.  When we first met Merida at the Magic Kingdom Meet and Greet, my children were scared to try their hand at archery.  After seeing my children finally attempting archery at Epcot, I have a tip for hitting the target: Let go of the arrow!  The cast member was very patient and showed them the correct stance, how to hold the bowstring and arrow, and finally how to release the arrow.

Flip the Haggis was the next event.  My children had no idea about what they were flipping.  I must saw that even though haggis is actually quite good, the idea of it still does not sit right in my tummy.  The Cake Toss was the final game they were able to play.  The Mini Caber Toss was shut down for the day, due to wilting logs.  Seriously, that is how hot and humid it was that day! 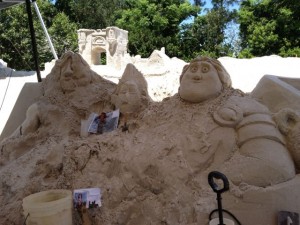 Built where the Chimpanzees sand display was, the Brave sand display is an elaborate piece of art.  Both sides of the sand display have characters sketched and shaped into the sand as well as hidden Mickeys.  At the end of the path, guests are encouraged to create their own rubbing of the different Clans in exchange of Brave postcards.  Sadly, it was hot and our crayons were warm, so our rubbings were one big colored mess instead of a clear rubbing of each family.  It was still a fun idea and we are always happy to receive the collection of Brave postcards. 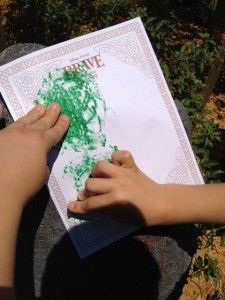 There is a walkway on the other side of the Highland Games Tournament with banners about the movie.  The triplets are even there being silly between the banners.  The playground that was left over from the Flower and Garden Show is now the Brave Training Grounds.  It is for guests 12 and under and still no drinks are allowed.  Be prepared to finish your drink before you get in there.  Don’t worry, they have a drink and ice cream cart strategically placed at the entrance so thirsty Clans will be taken care of as soon as they leave the Training Grounds. 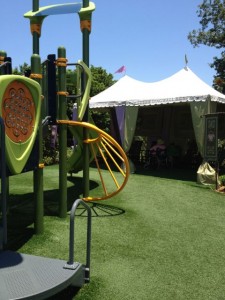 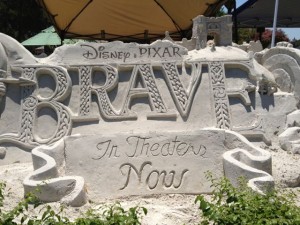 Next Post: Pizza Planet Truck and Sulley From Monsters Inc. Are in Brave