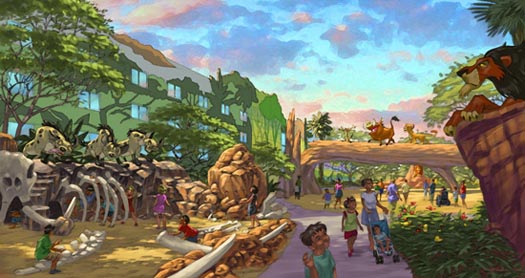 The resort will be themed to Cars, The Lion King, The Little Mermaid, and Finding Nemo. It will be located near the Pop Century Resort. The schedule for opening is “Finding Nemo” wing opening May 31, the “Cars” wing in late July, and “The Lion King” wing in late September. The final wing, themed after “The Little Mermaid,” will debut in late 2012.

The resort is set to break some records it will have the largest swimming pool at the Walt Disney World Resort (aside from their water parks). This pool will measure 11,859 square feet. The resort also will feature two other pools and a children’s water play area.

Disney’s Art of Animation Resort will be a “value” category of lodging, with nightly rates similar to Disney’s All-Star Resort and Disney’s Pop Century Resort.

Below is some more concept art for the resort.

Next Post: Walt Disney Death Announcements and Cartoons – He Died on This Day