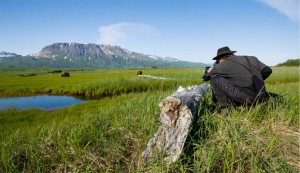 Disneynature has had some very popular films lately including Chimpanzee and African Cats. Now they have announced that they will make another movie, this time about Bears.

Disneynature’s 2014 motion picture “Bears” cozies up to the brown bears who call Alaska’s stunning coastal mountains and shores their home, revealing through tender moments and entertaining imagery how these animals are far from grizzly creatures. This shooting location provides some of the most spectacular visuals ever for a Disneynature film.  The film is directed by Keith Scholey (“African Cats”) and Alastair Fothergill (“Earth,” “African Cats” and “Chimpanzee”).

“Our commitment to the production of Disneynature films is to capture nature on its own terms and its own schedule. These films are never rushed so that we can tell never-before-seen stories in our natural world that both astound and charm audiences,” said Alan Bergman, president, The Walt Disney Studios. “Disneynature’s next adventure ‘Bears’ promises to continue this storytelling tradition by introducing audiences to a phenomenal variety of wildlife and offering rare glimpses into the day-to-day lives of these incredible animals.”

“Bears” is currently in production in Alaska’s Katmai National Park.

Previous Post: Looking into the Lives of Cast Members at the Disneyland Resort With Every Role a Starring Role Video Series