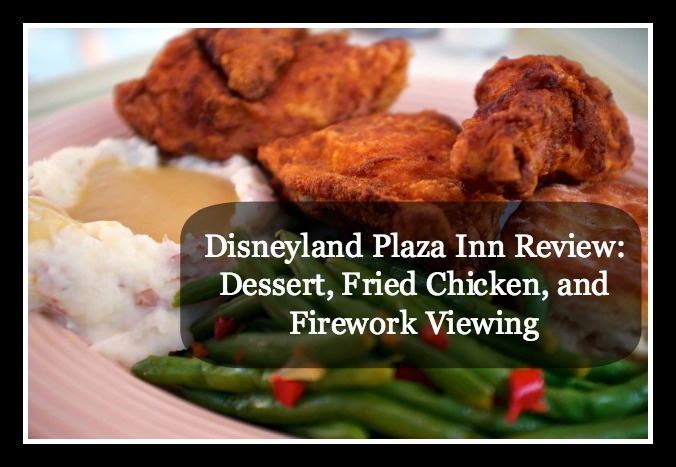 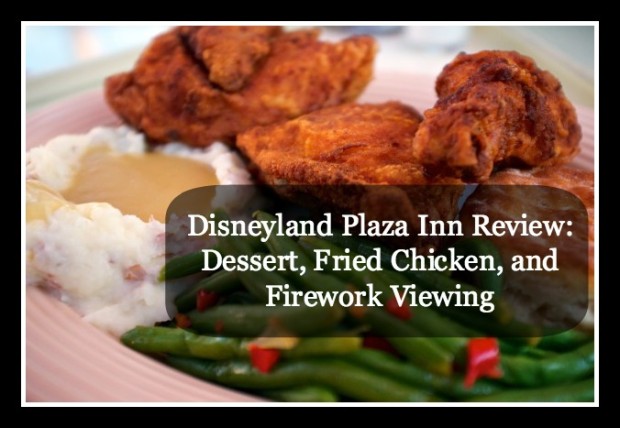 “Johnny let’s make sure it looks as good as the model does.” — Walt Disney on the Plaza Inn 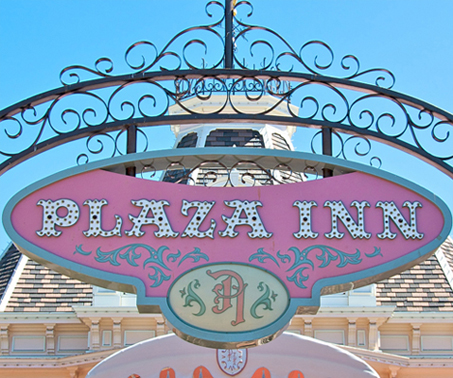 The Little Red Wagon That Could

When Disneyland opened on July 17, 1955, one of the most popular restaurants resided at the end of Main Street U.S.A., on the border of Tommorowland. Originally opening with the name Red Wagon Inn, according to rumor it was Walt's favorite restaurant. The Red Wagon Inn was the only eatery in the park that served not only breakfast, but also lunch, and full-course dinners.

In 1965 Walt worked with imagineer John Hench to redesign the Red Wagon in, turning it into the Plaza Inn. The re-design was even featured in Walt Disney Presents, and you can click here to see clips from that episode.

Here is a picture of Walt Disney enjoying a cup of coffee at the Plaza Inn circa 1966: 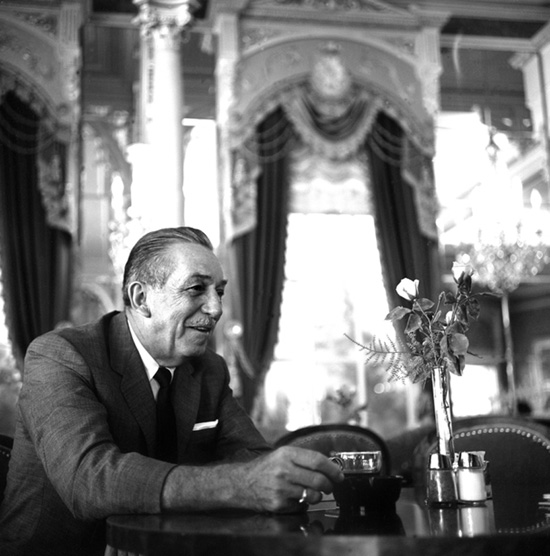 In 1999, the Plaza Inn went through it's final refurbishment turning it into the Plaza Inn that we know today. Throughout all the changes the one menu item that has stayed the same since 1955 is the Specialty Chicken.

Since the opening of the Plaza Inn, the Specialty Chicken ($13.99) has been the king of the menu. Many have compared it to the famous Knotts Berry Farm fried chicken sold just down the road. Today I got the scoop on this fried chicken. 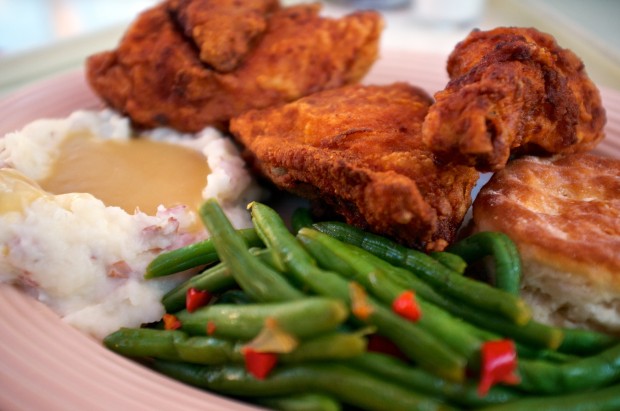 My plate included three pieces of chicken, seasoned with herbs and spices. Red mashed potatoes, gravy, a buttermilk biscuit and a mixture of vegetables came on the side of the plate. I started off with the chicken. It was cooked to perfection and the skin was golden and crispy.

The mashed potatoes and gravy were perfect. Sadly, the buttermilk biscuit  made the meal go down hill in my book. It was inedible and was bordering on stale. My side of vegetables was undercooked and lacked any taste. Had my biscuit and vegetables been up to par with the chicken and mashed potatoes I could easily have given this dish an amazing review.  In fact, the biscuit served with the meal made me crave the far superior KFC biscuit. 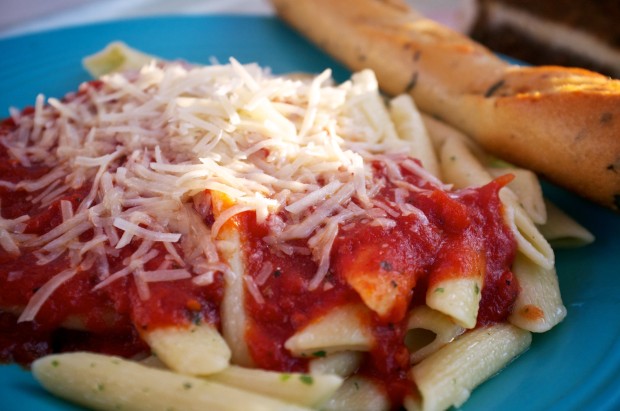 We also ordered the Penne Pasta with Marinara sauce. The pasta is served with a breadstick. Since our last visit, the breadsticks have been upgraded from a stale brick to a new fresh, soft, and well seasoned breadstick. While the pasta was a little bland, the marinara sauce was warm and filling. This is a perfect dish a picky eater. 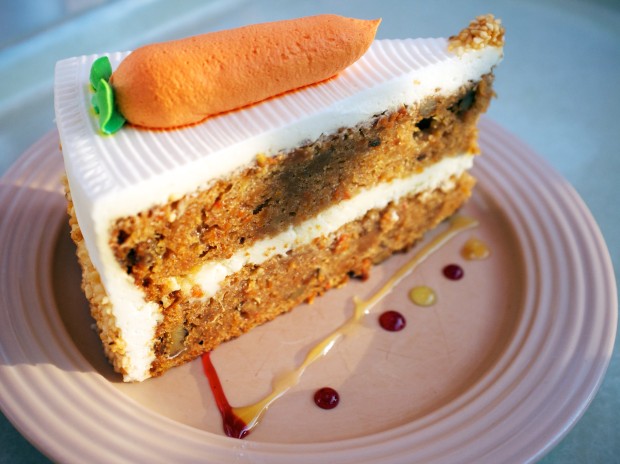 The first dessert we tried was the carrot cake. This was a winner. The carrot cake itself had a perfect texture of nuts, berry, and cake. The frosting itself was also light and did not weigh down the cake. Two of us cleaned the plate of one of these pretty fast. This would be a good dish to enjoy while waiting for a parade on Main Street. 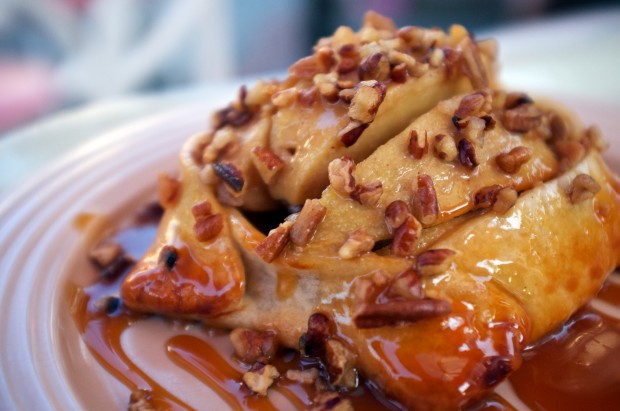 The second dessert item we tried was the Apple Crostata. The flaky crust of the crostata was cooked perfectly and the caramel and toasted nuts added a great flavor and texture as well. Sadly, the apples in the crostata were all undercooked and after a few bites we ended up discarding the remainder. Based on the looks of the Crostata, I was expecting greatness, it was quite disappointing to find undercooked apples. This is a dessert that I would try again because I know that there is possibility for greatness.

Overall the atmosphere is enjoyable. The restaurant is great to get out of the heat and crowds. However, during our multiple visits I have only ever experienced mediocre food.

Look to the Carnation Café for an equally good atmosphere and much better food.

With that in mind though, the Plaza Inn is highly recommended for getting a bite to eat before watching the parade or fireworks, because if you get a table outside on the edge of the seating area you will be in a perfect viewing spot.

In conclusion, I rate Plaza Inn at a three out of five stars.

This article was written by our guest reviewer Matt. Interested in writing for us? Contact us here.

Previous Post: CONTEST: The Luxury Guide to Disney Vacations Will Have You Touring Disneyland and WDW Like Royalty