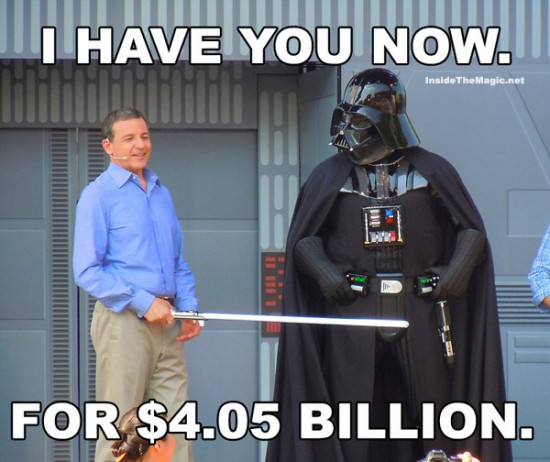 Disney acquires George Lucas' properties, including LucasFilm, Star Wars, Industrial Light and Magic, Indiana Jones, and Skywalker Sound. Seeing that text pop up on my phone at 4:19 PM today combined two giants that I respect greatly and actually made my fingers tingle.  I had finished school but still had a long night ahead of me.  Throughout the evening, my thoughts drifted to a world where Star Wars and Disney were intertwined.

Oh, the possibilities that are in store and I am alive to see it happen.  How wonderous! Now, I may be thinking too small, but I keep imagining of what future movies will be like, how Disney's acquisition will affect the saga, and of course, the future of STAR WARS WEEKENDS!  In Disney's press release this afternoon, Iger said “Lucasfilm reflects the extraordinary passion, vision, and storytelling of its founder, George Lucas.”  The same can be said about Walt Disney and the Walt Disney Company.  Having these two incredible storytellers coming together will definitely keep Star Wars fresh on the minds of future generations of Star Wars fans.

If you didn't know, the saga is not over.  Star Wars Episode 7 is scheduled to be released in 2015 with future episodes to be released every 2-3 years after that.  My parents and I saw the “original” movies over the years in the theaters, then on VHS and now on DVDs.  My children tend to lean towards the newer movies and have a deeper understanding of the entire saga since they were able to “see” how the story unfolds.  To think that my daughter may sit with her husband and watch Episode 9 is just incredible.  It is a scary thing to think that someone else has control over LucasFilm but knowing that it is Disney makes me feel better.  For George Lucas to give up control over something he has held so dear to his heart for decades is a testament to his faith in Disney and their ability to build upon an empire.

Here is George talking about the upcoming movies: 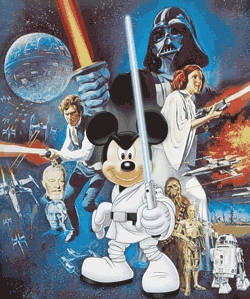 Star Wars is multi-generational in my family, as it is in many families all over the world.  That was clearly evident at Star Wars Celebration VI and every time my kids see a Star Wars book at the store.  Avid fans have been wrapped up in the Star Wars saga through the movies and books since 1977.   Star Wars books have a home on both the bookshelf at my house and in my classroom and I am sure that a few are scattered in between.  I will be looking for Darth Vader on Dumbo and Storm Troopers having Mickey ice cream or a Goofy Glacier when I am at the Magic Kingdom.  May the force be with you, Mickey.

Editor's Note: Don't forget about the rumors of a possible Star Wars land in Hollywood Studios or may even Disney California Adventure. What do you think?

Previous Post: Are you ready for the Osborne Family Lights?

Next Post: Top Ten Must Do Attractions at the Disneyland Resort