During Cinema Con a conference in Las Vegas, Disney released news about three new movies, a sequel, and more information on projects that were already announced.

While Disney did talk about “Monsters, Inc.” called “Monsters University,” “Frankenweenie” and “Oz: The Great and Powerful,” along with in person presentations by their director, the real excitement came later.

Recently Disney confirmed that a sequel was in the works for the Muppets, simply titled the “Muppets 2.” A title poster was revealed on stage, and Kermit and Ms. Piggy came on to make the announcement.

After the Muppets announcement Disney continued on to talk about the Pixar world. The biggest announcement was that Pixar director Lee Unkrich would be working on a film celebrating Dia de Los Muertos. I personally think that it will be very interesting to see Pixar animate a day of the dead film.

Disney also named the nameless dinosaur movie that was first announced at the D23 Expo. The name of the new movie is “The Good Dinosaur,” and Disney released the following synopsis.

What if the cataclysmic asteroid that forever changed life on Earth actually missed the planet completely and giant dinosaurs never became extinct? This hilarious, heartfelt and original tale is directed by Bob Peterson (co-director/writer, “Up;” writer, “Finding Nemo”) and produced by John Walker (“The Incredibles,” “The Iron Giant”). 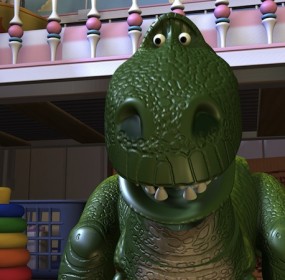 Disney also elaborated more on the movie about the journey into the mind, releasing the below synopsis.

Pixar takes audiences on incredible journeys into extraordinary worlds: from the darkest depths of the ocean to the top of the tepui mountains in South America; from the fictional metropolis of Monstropolis to a futuristic fantasy of outer space. From director Pete Docter (“Up,” “Monsters, Inc.”) and producer Jonas Rivera (“Up”), the inventive new film will take you to a place that everyone knows, but no one has ever seen: the world inside the human mind.

Disney also announced that Jack White of the band the White Stripes, would be writing the score for the new movie the Lone Ranger. This new movie will be his first film score.

What do you think of these new movies? Which do you want to see the most?