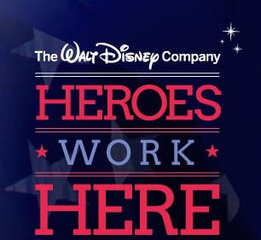 As part of the initiative, Disney will provide at least 1,000 jobs and career opportunities for returning U.S. veterans over the next three years, support military families and veterans during their transition into civilian life, and launch a national public awareness campaign to encourage all employers across the U.S. to hire veterans.

In addition to providing career opportunities for veterans, Disney will also invest in select non-profit organizations that provide training and other support services.  Through the Disney VoluntEARS program, employees will also engage in service projects with veterans’ organizations in communities around the country. The public awareness campaign, featuring veterans currently employed in various businesses across The Walt Disney Company, will highlight their value, encourage companies to hire these highly skilled men and women, and direct them to the Joining Forces initiative for more information.

Mr. Iger debuted the first spot at the conference, which can be viewed here:

“As a new generation of America’s military men and women transition into civilian life, we are increasing our commitment and support for these modern day heroes,” said Mr. Iger.  “It’s a measure of our respect for how much they have sacrificed on our behalf, and our sincere gratitude for their extraordinary contributions to this country.”

He added, “The military values of honor, integrity, commitment, and courage, along with the skills and experience they’ve gained through their service, make veterans incredibly valuable employees for any company.”

Heroes Work Here includes recruitment efforts across all segments of The Walt Disney Company, including ESPN, the Disney-ABC Television Group, Disney Consumer Products, The Walt Disney Studios, and Disney Parks and Resorts. The company will host career fairs and participate in events designed to showcase opportunities for returning military personnel.

Information about Heroes Work Here and available positions for veterans can be found at a dedicated section of the Disney Careers Website.

Next Post: The Muppets Will Receive a Star on the Hollywood Walk of Fame