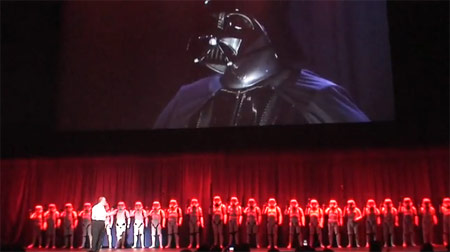 This morning, Alan Horn, head of the Disney Studios, teased the new Star Wars movies by saying that “our priority is of course Star Wars.”

Darth Vader presentation at the

They then brought Darth Vader on the huge screen and he started to move. The scene was reminiscent to the Star Tours 2.o announcement. The audience suddenly erupted they were going crazy, getting goose bumps, and tingles ready to hear about the new Star Wars movies.

Then it…it..it…it…stopped. The entire thing just STOPPED! On to Marvel they said!

Darth Vader was just there to make sure that no official Empire secrets were shared.

It was a tease that is all. No Star Wars news here, just fan fun. That is fine with us, but boy I can't wait for when they do make an announcement.

Previous Post: Into the Woods Movie Details Revealed at the D23 Expo