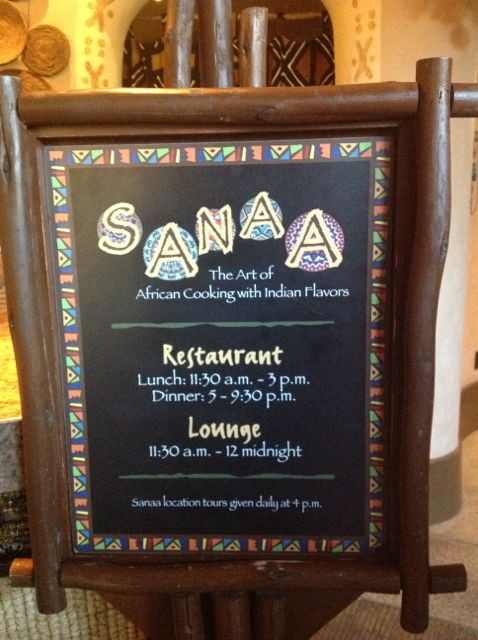 On my last stay at Animal Kingdom Lodge (Kidani Village), we finally went on the Cultural Tour of Sanaa.  It has always been on the Activity Guide but we have not been to go to it until this visit.  I wish we had done in months ago because it was an incredible experience.  It was both educational and yummy. 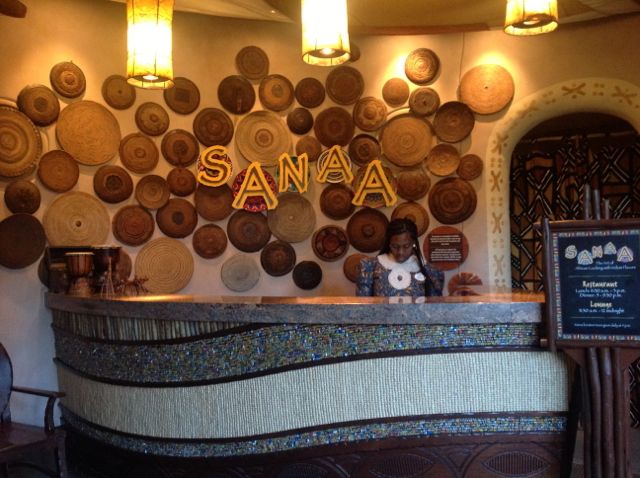 If you have never been to Sanaa, it is worth the trip down the elevator.  There are both stairs and an elevator that lead down to Sanaa, which is on the first floor of Kidani Village at Animal Kingdom Lodge.

Our Cultural Representative came to Disney from his country about six months ago.  He had many personal stories that added to the experience, which included picking up some of items, letting us hold them, and even offering for us to take home a piece of reed. 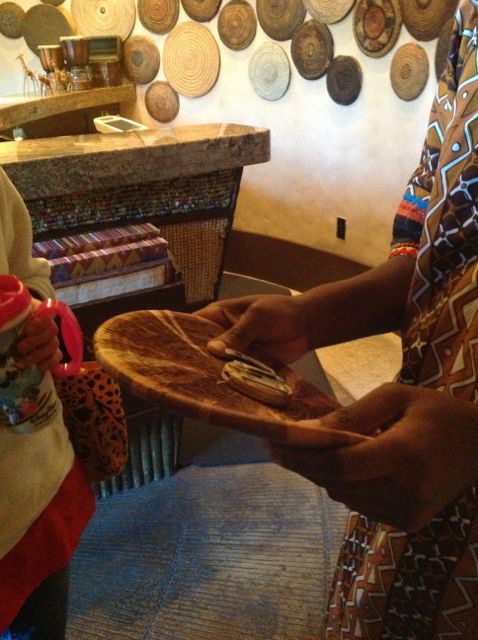 The Tour started at the front desk.  Behind the front desk is a wall full of the bottoms of weaved baskets, various colors, textures, and made of different materials.  In order to make the baskets different colors, they are boiled.  The darker colors mean that they were boiled longer.  Most of the baskets were made of reeds but the ones from our Cultural Representatives country are made of beads.  He took one of the baskets down from the wall and showed us how it was made and told us about how his Grandma made her baskets out of beads.  It only took her a day to make a basket out of the teeny tiny beads, which is incredible since I assumed it took weeks to make one basket.  In the middle of the baskets is the word, “Sanaa.”  Sanaa means art work in Swahili.  The whole restaurant is filled with artwork from all over Africa. 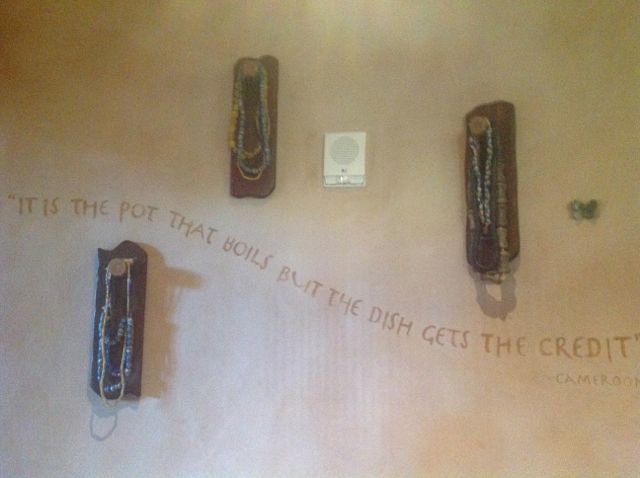 Not only is Sanaa an art museum, it is also an African Market.  At a market, those baskets, necklaces, and other items would be for sell. All of the items in Sanaa are also on display like they would be at a market. 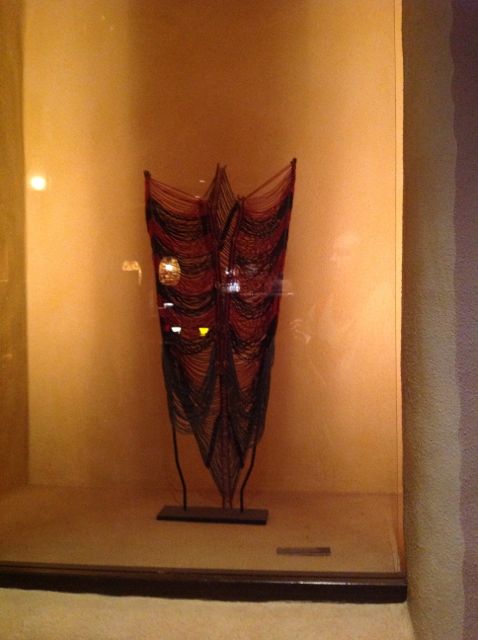 One of the first items you pass when walking into Sanaa is the Dina beaded blouse. 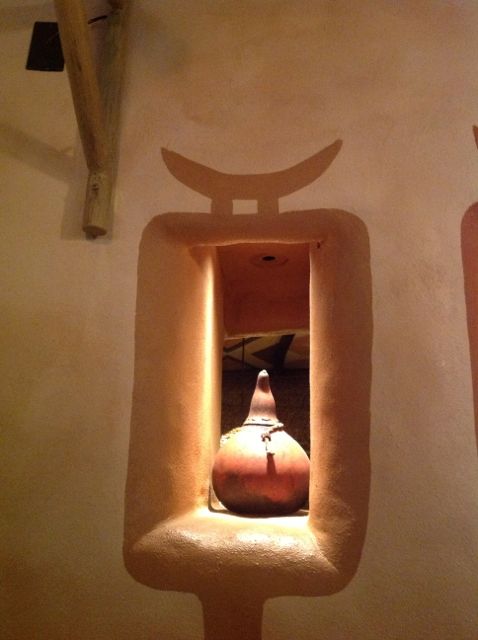 The next item you stop at is a gourd.  This gourd is used to hold beer.  The beer is made of corn meal and is cooked in a clay pot and then left in a large gourd for a week so it will ferment.  Once it ferments, the gourd splits up.  The foam that sits on the sides of the gourd are scraped off and is used for yeast to make dough.  Once the beer is ready, it is transferred to this smaller gourd. The gourd keeps the beer very cold and is easy for everyone to use.  There was another gourd by the beer one that is used to hold water.  Again, it keeps the water extremely cold for all that use it.  That's right, everyone uses the same gourd. Everyone drinks from the same gourd.  That encourages the spirit of togetherness instead of everyone getting his or her drink and shuffling off to different parts of the room or market. 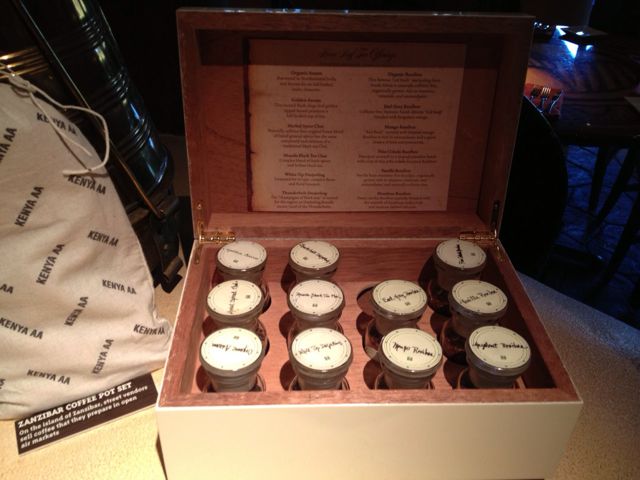 The tour continues and takes you to the teas.  Now, if you don't know, tea is my passion.  At the time that we approached where the teas sit, another group were already taking in the scents of the teas at another table.  Don't worry, they made for that at the end of the tour!

The teas and the Kenyan Tea Pot, along with all of the tables in Sanaa sit under this gorgeous tree.  The teas are at the trunk and the branches reach out and shade all of the restaurant.  This tree also provides food for the giraffes in Africa.  Like many things in Sanaa, it serves multiple purposes and it just as beautiful as any other piece of “Sanaa” in Animal Kingdom Lodge. 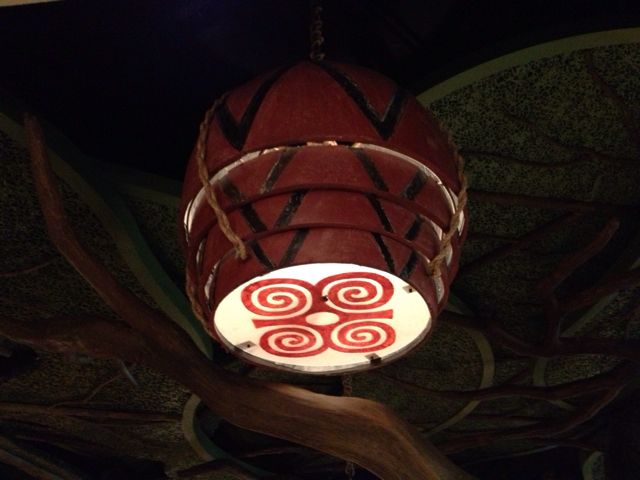 The lights of Sanaa are just as artistic as the artifacts that sit along and in the walls.  There are clay pots, baskets, and glass bottles used as lights throughout Sanaa. 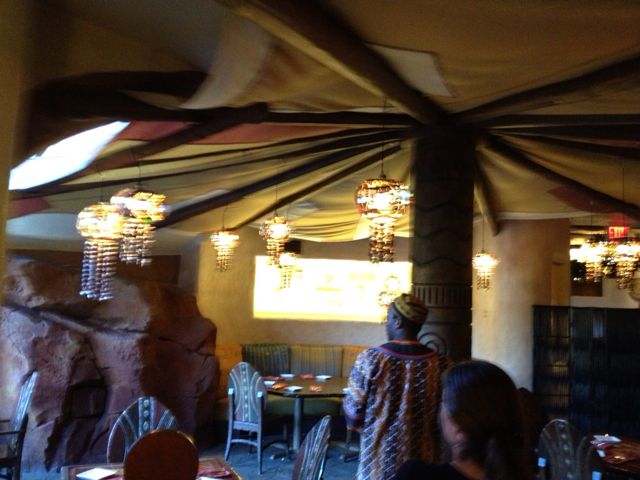 There is one spot of Sanaa that is more private and would be great if you have a large group.  It is called Boma.  Sound familiar?  According to our Cultural Representative, Boma means hiding place.  Boma is defined as an enclosure, mainly a fort, lifestock enclosure, or an office building.  In the boma, you can find the Kenyan Wedding Challenge Wall. 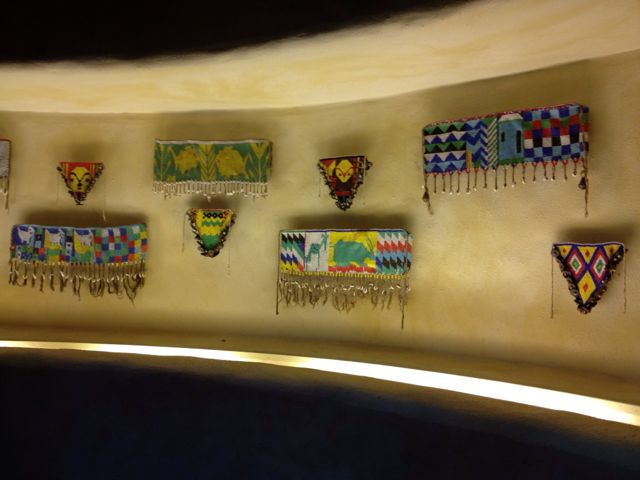 When a Kenyan couple wants to marry, they are challenged to create decorated beaded items of clothing.  The woman makes a decorative piece that sits on the waist and the man has to create a piece for both the top and bottom.  Each item is to tell a story.  In the beadwork hanging on the wall, you can see mainly chickens and cows.  One piece had a house on it.  I think that is a clear indication of what is considered “wealth” in some parts of Kenya. 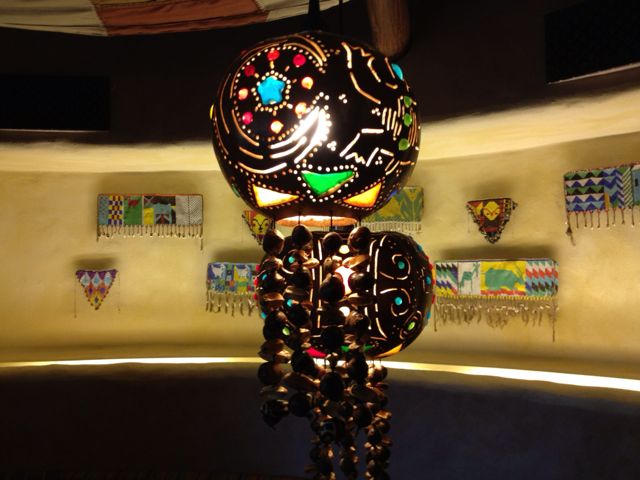 The lamps that hang in the Boma section have hanging beautiful tree seeds.  These seeds are the favorite of elephants and our Cultural Representative.  He talked about how he would take those off of the trees and eat them as a kid. 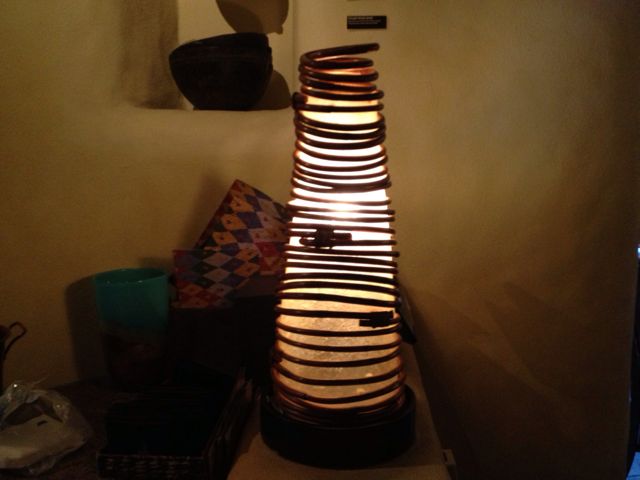 Some of the lamps around the Boma section are rings.  These rings are worn as a sign of wealth in South Africa.  Wealth does not necessarily mean money.  Instead, it could means children, land, wives, houses, and life stock.  Our guide did mention that having many wives is not a common trend across all of Africa.  Where he is from, men have only one wife and having more than one is not allowed. 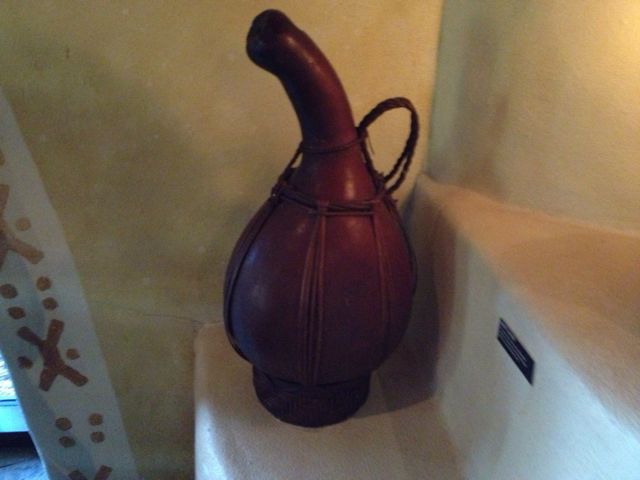 Also in the Boma section is a Bajut gourd.  When there is a ceremony, the girls are the ones that collect the water in the gourd from the river and fill the tanks of water.  The men are in charge of collecting firewood.  Some parts of Africa have very traditional roles for men and women. 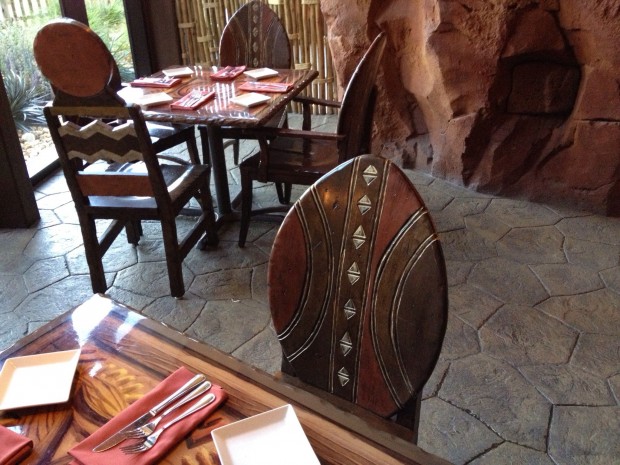 Throughout Sanaa are decorative chairs but our guide didn't talk about them until the Boma section.  Next time you visit Sanaa, take a look at their chairs.  Some of the chairs have arm rests and shields on the back while the others have no arm rests.  The  chairs for the Queens and Princesses do not have arm rests because they normally have elaborate garments that need to drape over the sides of the chair.  The King's chair has arm rests so he can sit tall and proud with his family and village people.  After our guide pointed out the chairs, I looked at the other chairs around the tables in Sanaa.  Some had just one King chair and the rest being Queen or Princess chairs and some had two King chairs.  Now, my husband normally prefers a “Queen” chair since arm rests get in the way sometimes.  When we eat at Sanaa, I am not sure if he will go with his normal choice or be drawn towards the King chair because he is our “King.” 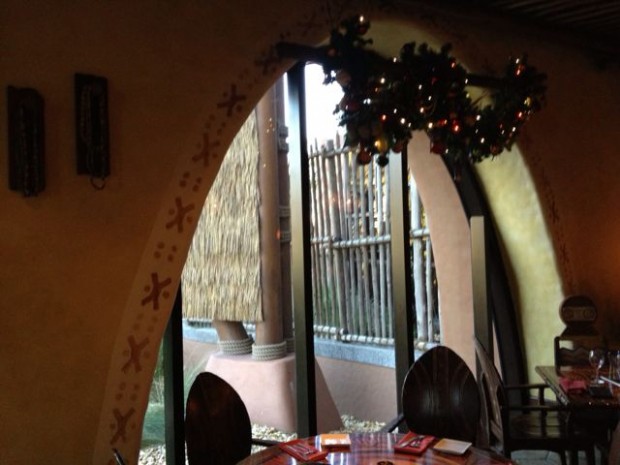 Along the walls of Sanaa are floor to ceiling windows with breath-taking views of the Savanna.  These windows are lined with gorgeous “rock paintings.”  These rock paintings are similar to the ones found in Africa, which were created long, long ago.  People visit them from all over the world and now people that visit Sanaa can experience them while they catch a glimpse of the animals on the Savanna. 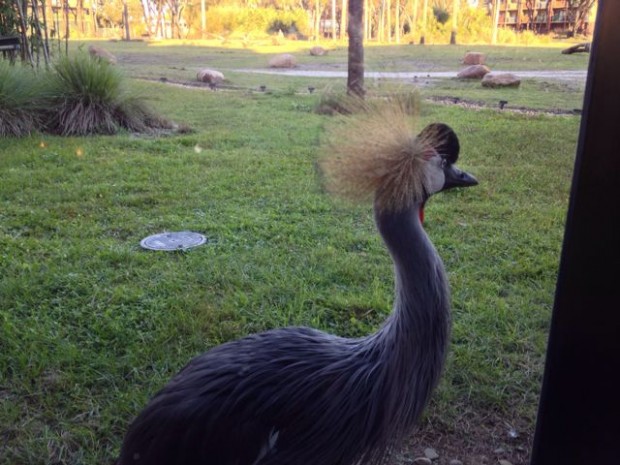 While we were taking the tour, the zebras chased each other next to the windows, the ostrich poked by, and an African Crowned Crane named Lamar stopped at the window long enough for my husband to take a picture. 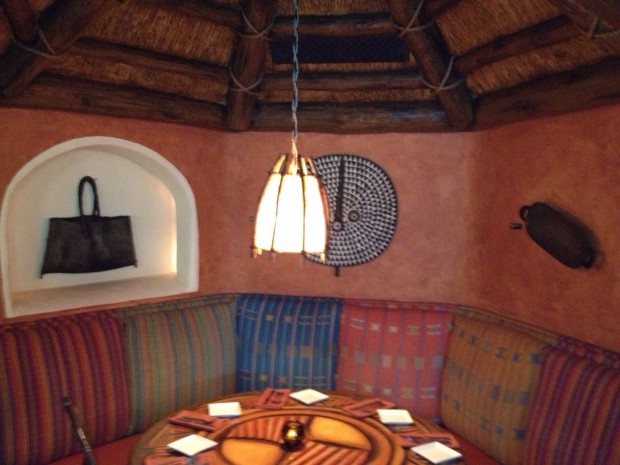 Another section of Sanaa has booths with roofs.  These booths are for the King's party and on each side is a booth for his wives and their parties.  These booths serve two purposes: to host the royal family and to look over the market and the village. 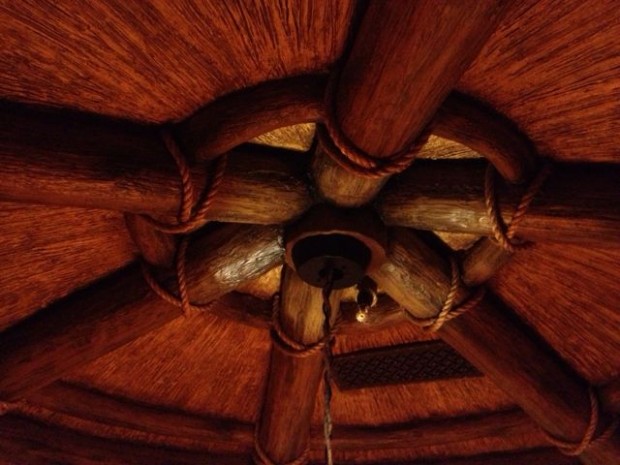 The royal sitting area has thatched reed roofs, dyed clay walls, and beautiful artwork in each “hut.”  The walls of the huts are typically made of soil and cow dung to prevent termites from attacking the house and roof. 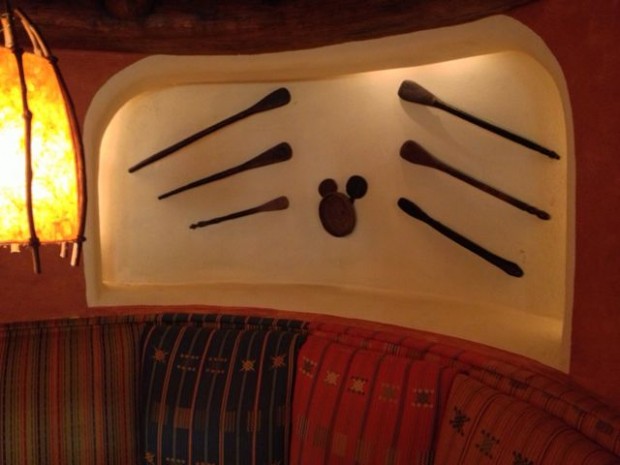 The guide also mentioned that school is not prominent in some places in Africa, yet the women create such beautiful artwork by hand.  He holds women in very high regard, especially the women in his own family. 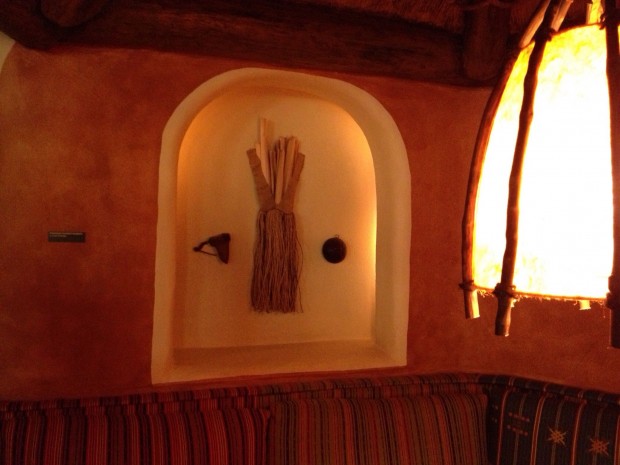 There is a basket full of reeds in one of the wife's houses.  Our guide took out one reed and explained how his own grandmother uses these leaves to create baskets with a homemade needle! 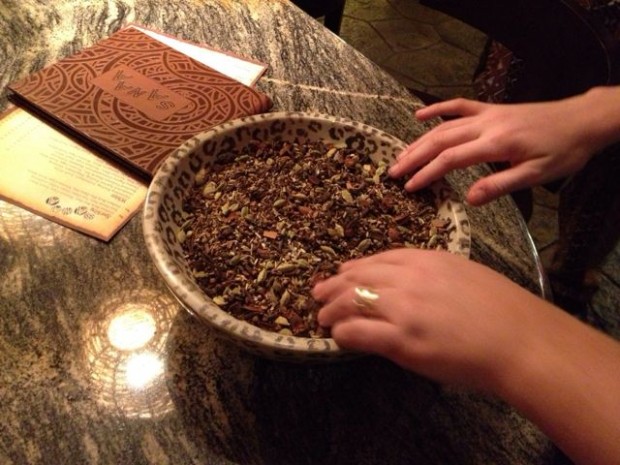 One of my main questions about Sanaa is why there is an Indian influence on an African restaurant.  That question was finally answered towards the end of the tour.  Indians have lived in Africa for over 150 years.  They came to work in sugar cane factories and through trading, Indians and Africans began to learn about each other through their spices.  Many parts of Africa now have an Indian influence with a mixture of the awesome tastes of Africa along with the rich spices of India. 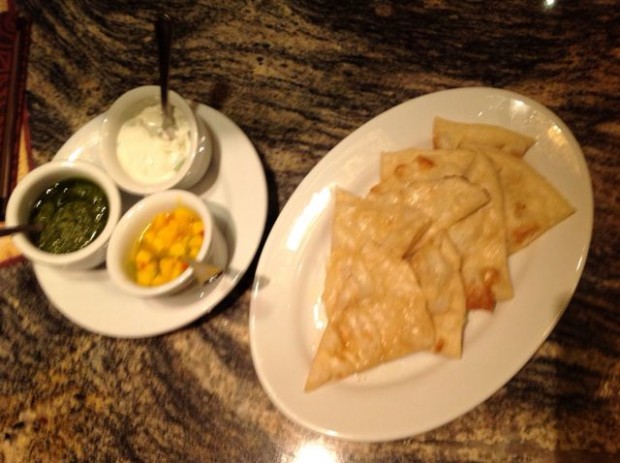 Ending the tour with a sampling of the Naan bread and assorted dips was perfect (and FREE!)  I have had Naan bread before and I must say, it is my favorite type of bread.  If you have never seen or heard of Naan bread, it is cooked by kneading out the dough into a circle and then throwing it on the side of the oven.  You can actually see it being made in Landscape of Flavors in Art of Animation.  Anyway, after smelling and touching the Indian spices that were sitting on the lounge bar, we were escorted to the long table in the Sanaa Lounge.  The chef brought out a plate of traditional Naan bread and three dips: Mango Chutney, Coriander Chutney, and Cucumber Raita. 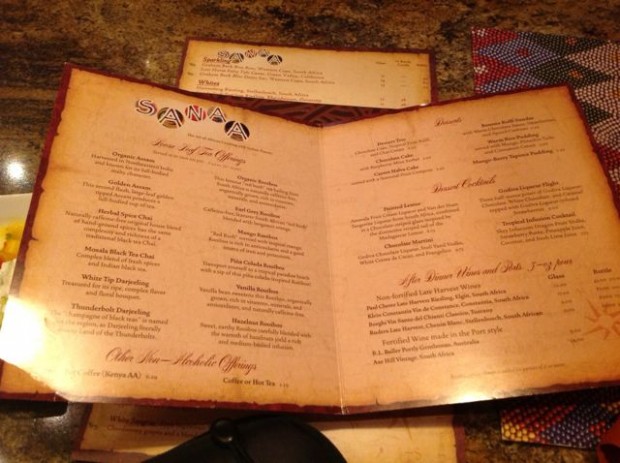 We were able to sit and relax while we sampled the bread and accompanients. 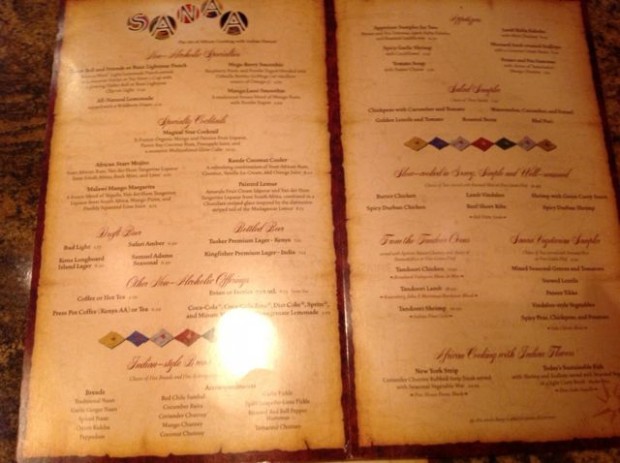 Of course, they also handed us a menu, a drink menu, and brought over the teas for us to smell. 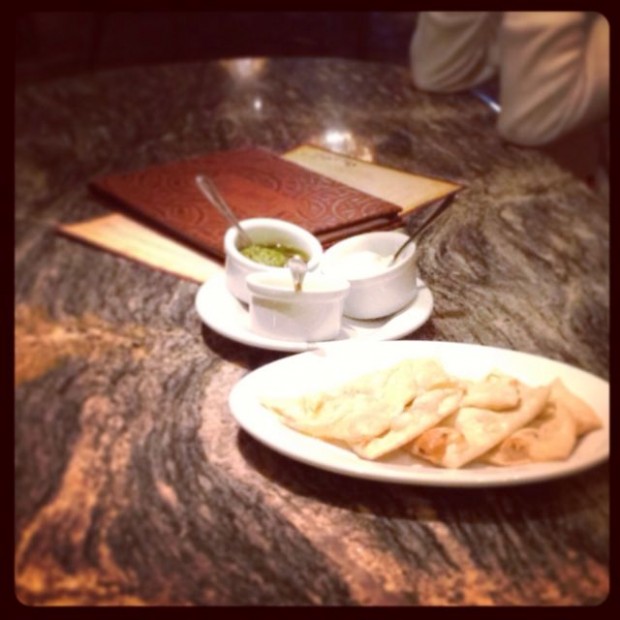 Even if Indian or African food is not your cup of tea, I definitely recommend visiting Sanaa.  There are so many items on the menu that can be combined or items that are stand alone that there is something for everyone.  I think that I will place a reservation for a full out dinner but then another reservation for the bread dish, salad trio, dessert, and the tea!  If you are wanting just the tea, you can stop at the Sanaa Lounge and order one of the many delicious and authentic teas.  I didn't leave before getting one tea to go.

I highly recommend the Cultural Tour of Sanaa the next time you are at Disney World. You do not have to be staying at Animal Kingdom Lodge to enjoy the tour.  I am sure that is preferred but maybe it will convince you to come to Kidani Village, one the best places to stay on Disney property.

You can see some of the pictures posted on Twitter and Instagram by following @DisneyTipsPics and watching for #DisneyDose and #Sanaa.