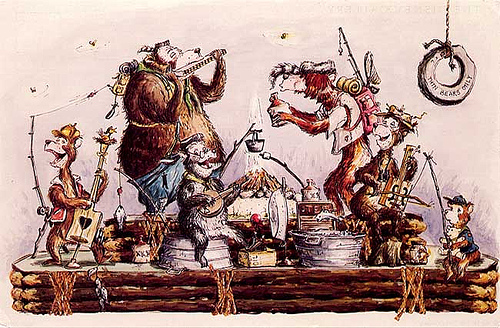 Walt Disney Worlds' Country Bear Jamboree will be retooled. Similar to the redesign of the Enchanted Tiki Room in the Magic Kingdom Disney will be taking Country Bear Jamboree through a heavy renovation. According to Disney, modern audiences won't sit through a 15 minute show in the dark starring audio-animatronic bears. The show will go into renovation and rejuvenation August 22nd the rumor is that they will retool the show, shortening it 4 to 5 minutes to about 10 minutes in length. The song Disney is rumored to cut is “Mama don’t shoot little Buford,” a song that takes child abuse to lightly according to the rumors.

My thoughts are these. 1) I will always miss the original version that has lived in Walt Disney World since the 70's. 2) Change is usually a good thing when orchestrated by Disney Imagineers. What if each show was randomized similar to Star Tours 2 making each show a unique experience. If they did this along with adding new songs. Disney could completely revitalized the American classic that made Walt Disney laugh for the last time, Country Bear Jamboree.

Here is a video of the entire attraction if you can't get out to see the show before the closing on the 22 of August.