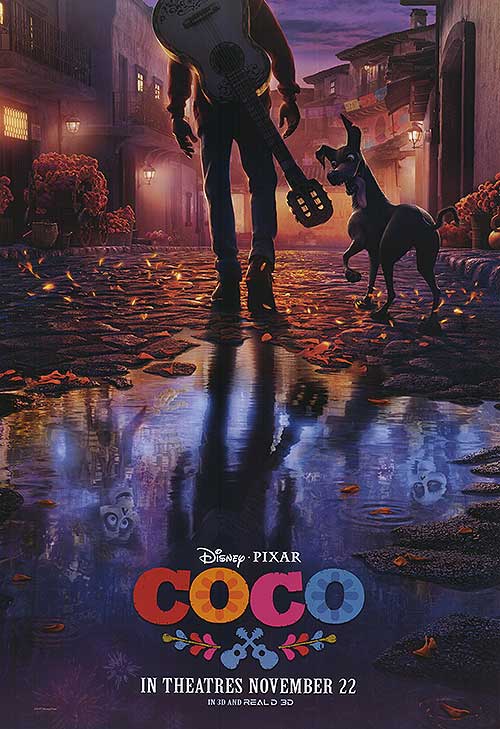 Coming off Toy Story 3, director Lee Unkrich had an idea. He wanted to create a film based upon the Mexican celebration of Dia de Los Muertos. This was one of three ideas that he presented to the Pixar Braintrust to be his next project.

Unkrich shared that he “had always been interested in the tradition, and spent some time doing some research, and really trying to understand more than [he] already knew.  And the more that I dug in, the more that I learned about how central family is to this celebration, and that Dia de Muertos is, you know, is all about this obligation that we all have to remember our loved ones, and to pass their stories along.  And I just really started to see the potential to tell a unique story, to tell a story that could only be told in animation, that could be visually dazzling, but also had the potential to have a real emotional core to it.  And that was really kind of the beginning of this journey.”

With his further development of the idea, he and his team at Pixar began to research the beautiful traditions. He shared they “immediately headed down to Mexico and went on the first of what proved to be many lengthy research trips, to spend time learning about the traditions, learning about the culture, and spending a lot of time with many beautiful families down in Mexico.”

Throughout the development of the film, the team worked with cultural advisors that helped them to make sure that the film felt true and authentic. This partnership combined with the numerous research trips down to Mexico paved the way for a deeper understanding that was culturally sensitive.

The co-director of the film, Adrian Molina, shared how special the creation of the project was to him. He shared that he “felt like [he] had a lot of experience to bring to it, and also just the way we work at Pixar, it’s such a collaborative effort, and to be able to work with all of these actors, all of these musicians, and to really bring to life this culture on screen was something that [he] was thrilled by.”

Molina rose rapidly on the film–he started as a storyboard artist and was soon elevated to co-director due to his passion for the project and knowledge of the subject. He started at Pixar as a 2D animator working on the credits of Ratatouille and quickly, in Pixar terms at least, made it up the line to help lead a production.

The film did face some difficulty throughout the process with a couple of cultural missteps and one potential look-a-like project. Early on in the process, the team had thought about calling the film “Dia de Los Muertos.” Part of the process for Disney in okaying a film title is getting a trademark on that name. There was massive blowback from the public when it came out that Disney had attempted to seemingly trademark a holiday.

Of course the team didn't end up using “Dia de Los Muertos” as the name of the film and chose “Coco” instead. That character name “Coco” had been used in an early version of the script and is one of the last remnants of the earliest iterations.

The other big hold up came when the Book of Life film also centering around Dia de Los Muertos was announced. Unkrich shared that he was nervous that they would inadvertently create a similar film, but after the entire Coco crew screened that film on opening day they were thrilled to find that it was a completely different story even though it pulled inspiration from the same holiday. The director of Book of Life, Jorge Gutierrez, has even become a friend of the Coco team and attended the premiere. Unkrich's final word on this “duplication” was that “there are multiple Christmas movies, why can't there be multiple Day of the Dead movies.”

The hispanic cast was also very proud to tell this culturally specific story that happened to be released in a very politically charged moment. Alanna Ubach, who voices Mamá Imelda in the new film, shared that “they really did pay such a respect to the one quality that Latin families have across, and that is the importance of familia, and that is something that no presidents, or borders, or politics can ever break – that importance, the importance of familia.”

Coco is a fantastic film and you need to go out and see it with your family. It is one of my favorite Pixar films ever and the best film of the year.

Next Post: 8 Fox Classics That Will Find a Perfect Home at Disney