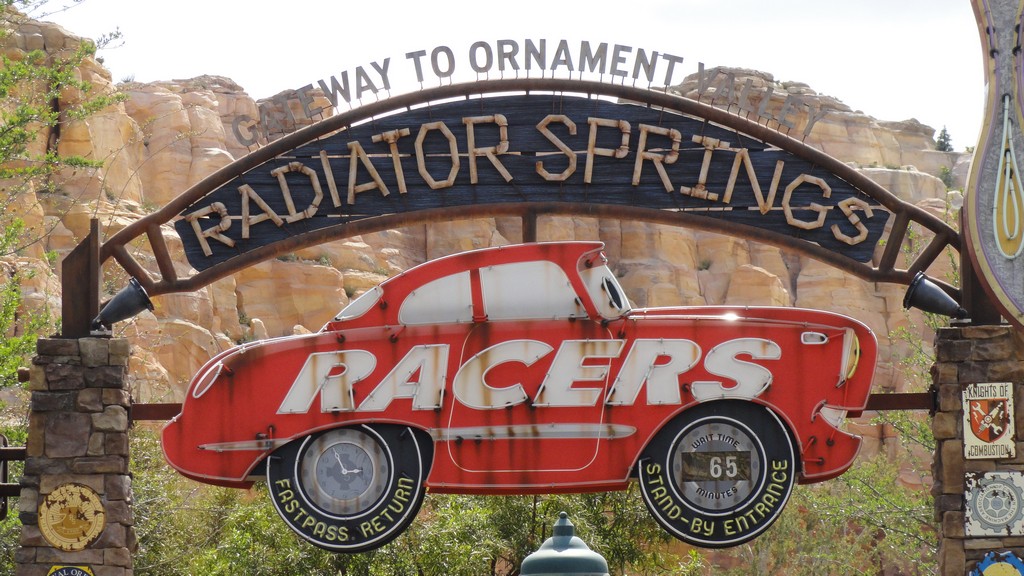 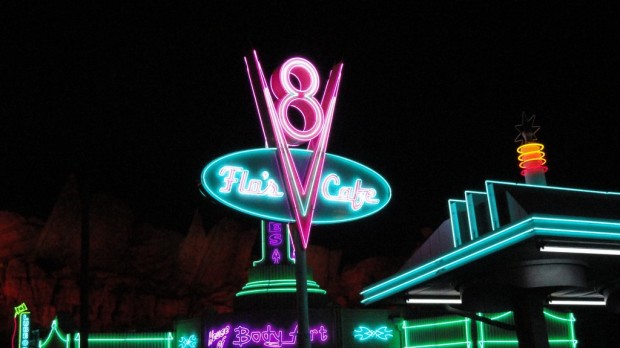 So my wife and I along with my sister and her husband just returned from a six day stay at the Disneyland Resort. As always, we had a great time. My wife and I hadn't been to Disneyland for almost two years so we had a lot to catch up on. And it all starts with Cars Land, a remarkable achievement by Disney Imagineers under the watchful eye of John Lasseter and his Pixar cohorts. Here's my Cars Land story in a nutshell. We arrived late on a Sunday afternoon and stood transfixed as the place went from an amazing recreation of the town of Radiator Springs to a dazzling jaw dropping display of light and neon as darkness took over. Just WOW! By Thursday and my sister asked if we wanted go back to Cars Land, my answer was “No. I've had enough of that place”. There's a lot to praise about Cars Land. And speaking only for myself, there some are quibbles, most minor, a few major. 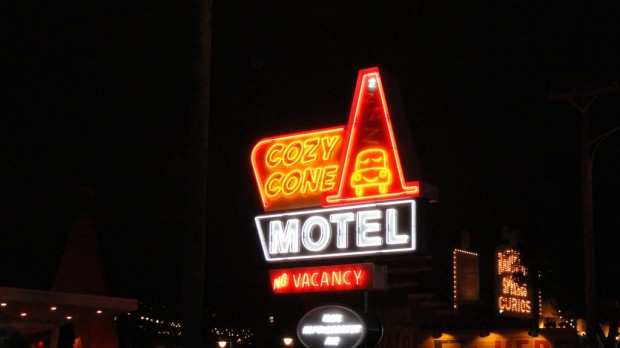 The ride is stunning from beginning to end with my only peeve being that it ends far too quickly. I kind of wish it didn't zip through the indoor show building scenes so quickly. The ride appeals to everyone, all ages, proving once again that great rides do not have to scare the pants of you to show their greatness. 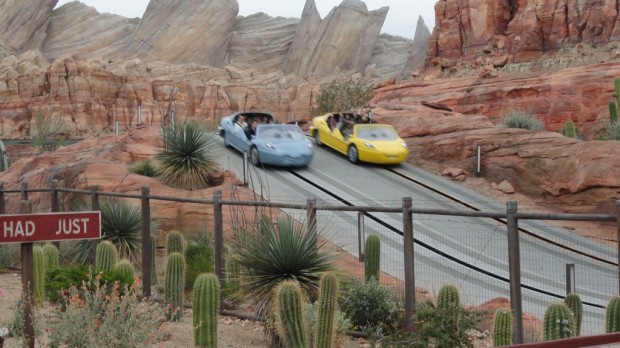 But here's my issue with Radiator Springs Racers. Just getting on the ride once can occupy a huge chunk of time of your Disney day. You can go the standby passenger route and get in line for 90 minutes to two hours, about the average wait time currently. You can do single rider option and cut that time by more than half. Or you can do what we did – twice. Get to the park early, get in that huge fast pass line that is hundreds of people deep, then get your fast pass that tells you to come back in 6 to 8 hours. There's a lot of time overhead with a ride that lasts about 4 minutes. Like Space Mountain or Splash Mountain, Radiator Springs Racers just isn't something that can be done again and again. The investment of time is just too great. 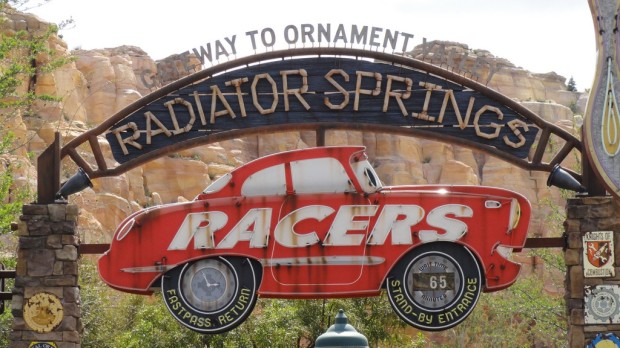 I think I've found another go-to counter service restaurant with Flo's V8 Cafe. We went there once for dinner and once for lunch. Although they also serve a breakfast (which we didn't have because we could never get past the Starbucks without stopping there), the regular menu offers a very nice turkey, roast beef or pork meal with a couple of sides choices for a reasonable price by Disney standards. Great food? No – but it is pretty good. Flo's also offers some great draft beer choices which can be enjoyed (and maybe needed) on a hot day (more on that in a bit). We really liked Flo's a lot. Also try the apple-cheddar cheese pie. Looks horrible – tastes great. 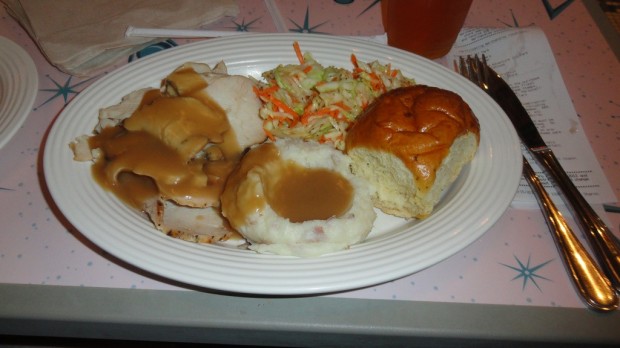 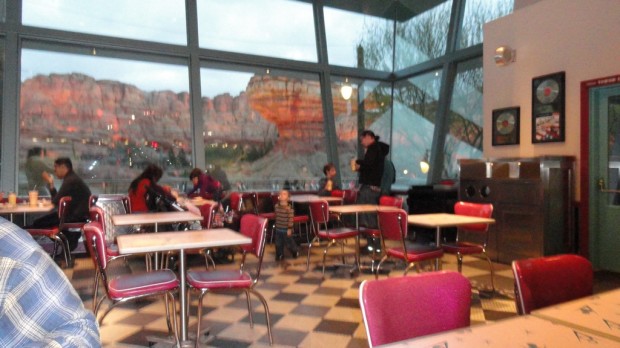 A view from Flo's toward Radator Springs Racers

So there is my praise for Cars Land. The place is a remarkable recreation of an animated movie. Radiator Springs Racers is a truly great ride. Flo's V8 Cafe is on of DCA's better counter service places to eat but now comes the things about Cars Land that kind of beat me down after a spending several hours there.

First, when we first arrived at the Disneyland Resort, the weather was still cool. By mid week, the temperature was rising rapidly. Hmmm – Radiator Springs is a dessert town. Guess what? There is very little shade in Cars Land. Combine that with a crush of people and it can get darn hot in there. Here's a sentence you will probably never hear – “Man, it's getting hot. Let's go to Cars Land and get out of the heat.”(CLICK To TWEET!) 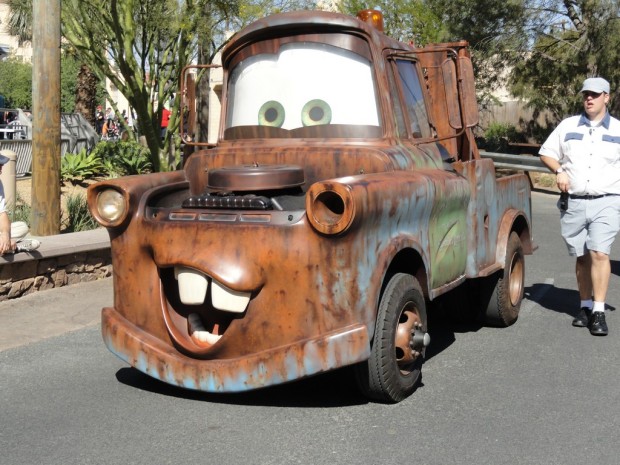 How much do you like to hear the voice of Larry the Cable Guy doing is Tow Mater character? If you're in Cars Land, you better like hearing the voice of Larry a lot because it's everywhere. It's on the on the soundtrack track for the Junkyard Jamboree (a sort of fun serviceable ride). The voice comes back with Mater's rotation for the meet and greet. It seems like I heard that babbling for hours straight just walking around. For me, a little bit of Larry the Cable Guy and Mater goes a long way. In Cars Land, it seems to be hard not to hear that voice.  Should have brought my headphones for my iPhone. 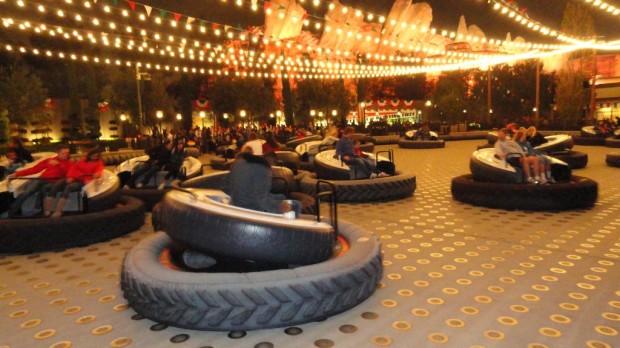 Luigi's Flying Tires – a really bad idea for a ride

Back in the early 60's, Disneyland's Tomorrowland had a hover craft ride (Flying Saucers). The ride lasted about 5 years and was removed when maintenance costs and the number of cast members it took to keep the ride operating did not equal its return. So Disney in their infinite wisdom brings the ride back with Luigi's Flying Tires. We didn't go on it but just stood their and watched the slow, ponderous flying tires bump their way around. Maybe some people liked it but you didn't see a lot of smiles and laughter when the ride cycle ended. It's just weird. Maybe Luigi's saving grace is its kind of tuck out of the way from Cars Land's main drag. It could be replaced without obstructing the amazing visuals of Cars Land some day. 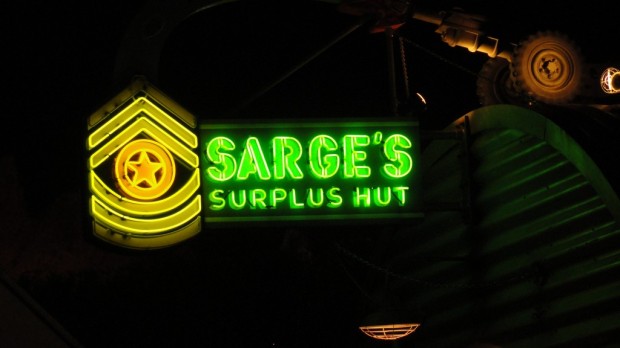 Disney dropped some serious money on Cars Land. It shows. It justified last year's major admission price hike (and people wait for the shoe to drop on this year's increases). Disney needs to make their money back on their Cars Land investment and there are multiple ways to do it. Besides price hikes, there are no shortage of cash registers in Cars Land as merchandise is sold in multiple location in a fairly small plot of land.  Add the merchandise to the “Cone” snack food walk-ups and Cars Land is a cash cow. Sorry, I'm not a shopper. Cars Land likes shoppers. 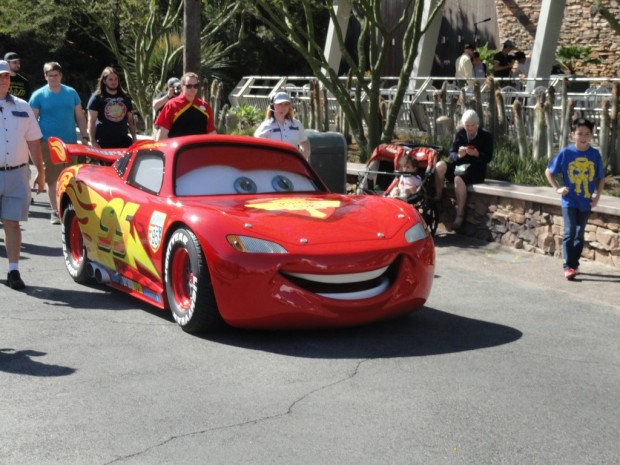 I guess my last quibble about Cars Land has to do with the Cars theme itself. The first Cars movie was a wonderful Pixar effort that was fun and told a great story with a visually stunning backdrop. Disney (and Pixar) made a fortune. Cars 2, in the opinion of many, may have been Pixar's worst movie. It was a lazy effort for a film company that has such a high bar. But the money from Cars continued to flow in so that makes the Disney corporate people quite happy. Cars makes Disney a fortune. But does theming an entire “land” based on a movie have staying power? What will Cars Land be in another 5, 10, 20 years? The Radiator Springs Racers ride will stand the test of time because it is that great. What about the rest of Cars Land. Think ToonTown, a shadow of its former self as time withered a lot of its whimsical inspiration away.

WHAT IS THE FUTURE OF TOONTOWN? 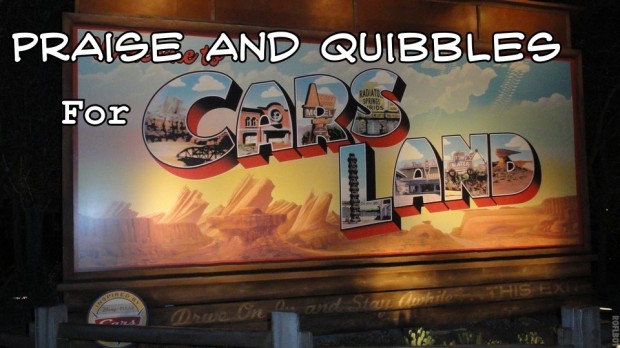 But for this year and for the immediate future Cars Land is a winner, a theme park game changer. People will continue to pour in and be amazed. As for me, on my next trip (Hopefully in November). I'll make the time and effort to get on Radiator Springs Racers, probably just once no matter how many days I am there. I'll eat again at Flo's, and make sure I see Cars Land at night when it displays all its beauty. Other than that, I'll walk on by. I've had my fill of Larry the Cable Guy for the entire year.