Five years ago Disney announced the plan for the re-invention of California Adventure. Now we are at the height of the expansion and Disney has officially announced the way the new park will be split up into eight different lands. Before the expansion there weren't really any clear lands except for Hollywood Backlot and everything else. I am so happy that the park will now be split up into clear sections. 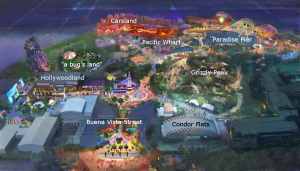 The Golden State will now be split up into Condor Flats and Grizzly Peak, and Pacific Wharf will be called an official land instead of just an area.The new lands will be Buena Vista Street, Carsland and Hollywood Pictures Backlot will be renamed Hollywoodland in honor of the old sign.

So all together there will be eight lands and they will be.

Next Post: Disney Takes Audio-Animatronics Out of Kilimanjaro Safaris