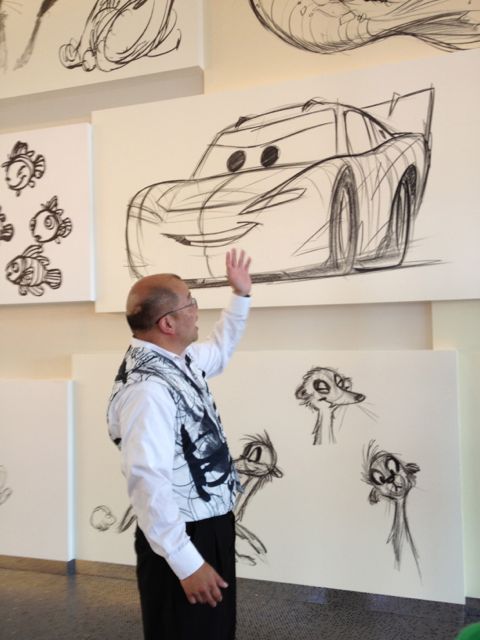 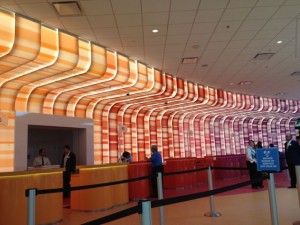 Like the start of many Disney fairy tales, Disney’s Art of Animation Resort starts out like a book.  The Art of Animation sign fills the entire windshield of the guest’s car as they pull up.  Once the guests enter the lobby, they are taken away to a beautifully animated creation.  Art, the happily elected tour guide led our group through the creation of the Resort and a Disney animated film through the Character Development Wall, Storyboard Chandelier, Color Strip Wall, and finally the setting.  Of course, he added in a few Disney details and secrets along the way. 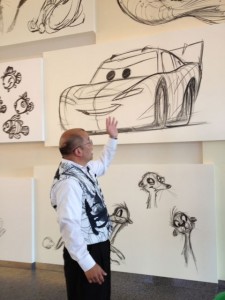 The lobby starts out at the children’s area, where an animator demonstrates his/her skills daily on the left and the wall that leads the guests through the creation of an animated film on the right.  The lobby wall is the Character Development Wall with some of the first sketches of the characters from Little Mermaid, Cars, Nemo, and Lion King.  Some of the characters like, Ariel, Lightning McQueen, and Crush are easily recognizable.  Timon and Ursula do not look like themselves.  These characters have come a long way from these initial sketches.  The characters become more recognizable in the middle of the wall with the exception of Nemo since his lucky fin is on the opposite side.  The end of the Character Development Wall has the characters fleshed out and ready for the next stage. 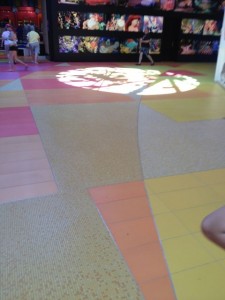 The floor, with its variety of color and tile, represents the old and new ways of creating animated films.  From the children’s area, the check in desks, and the concierge desk, comes waves of color like the hand drawn illustrations in the first Disney animated films.  About halfway through the lobby, the floor changes from waves to squares of color.  This pixilation represents the new way of creating animated films with the computer.  The colorful retro-looking light/art fixture behind the check-in desks is the largest piece of artwork placed in a Disney World Resort. 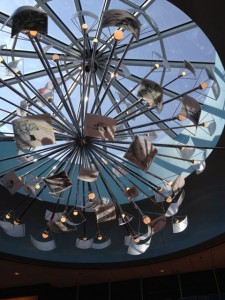 After walking through the lobby, guests approach the Storyboard Chandelier.  All four of the films are represented in the 77-panel chandelier.  John Lasseter signed only one of the panels.  Can you find it? The Color Strip Wall covers the entire outside wall of the Ink and Paint Shop, the Resort’s gift shop.  The colorful Lion King and the muted blue Nemo are on the left and Cars and Little Mermaid are on the right of the entrance.  The Color Strip Wall shows how animators test colors to see which ones would be perfect for each character and scene.  The Ink and Paint Shop shows the assortment of color used in animated films with jars of paint lining all the walls.  The cast members here are adorned with colorful attire.  This is a stark difference from his black and white vest and the beginning of an animated film. 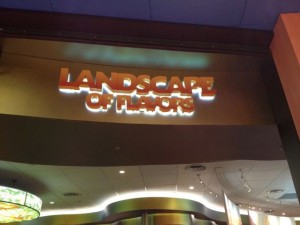 Once characters have been developed and color has been added, they are placed into the setting, which is represented by Landscape of Flavors, the quick service restaurant.  Each film has a dedicated section in Landscape of Flavors with an enormous themed light fixture, custom artwork and flooring.  Look for a hidden Mickey in one of the light fixtures.  Hint?  Look for the thinkamabobs.  Guests may notice that there is no carpet in this quick service.  Typically, carpet helps diffuse the sound and keep the area as quiet as possible.  It comes at a cost though since so many chemicals are used for cleaning.  The sound is diffused in Landscape of Flavors by the artwork, walls, light fixtures, and decorative curvy elements on the ceiling.   The characters have gone through all of the steps of creating an animated film and the action is about to begin when guests walk through the doors of Landscape of Flavors and out into the each themed section of Art of Animation Resort. 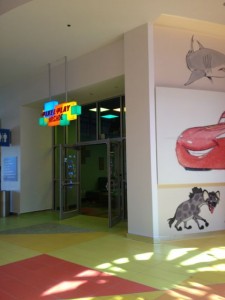 Staying at Art of Animation should be quite enjoyable since it is actually a Value Plus Resort.  The extra features that are included make mixing work with play so much more enjoyable.  In the lobby, there is a Business Center where guests can find out flight information and print boarding passes. The Pixar Play Arcade has a Parent Lounge with power outlets and free guest Wifi.  Kids can play in a secure area, with virtual tickets stored on their room keys, with no other exits besides the ones next to the Parent Lounge.  This allows parents to work or relax while the children play and not have to worry about carrying around a gob of tickets and worrying about lost tickets.  Knowing the many Disney details that are included in just the lobby makes me appreciate Disney World even more.  They continue to create a magical experience for their guests through their storytelling, no matter how inconspicuous as some of the details may be, as well as listen to their guests about their needs and wants in a resort.  Upcoming articles might even be written from a comfy seat in the Parent Lounge section of Pixar Play Arcade. 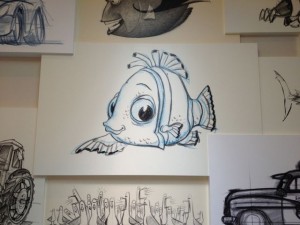 Nemo and his lucky fin