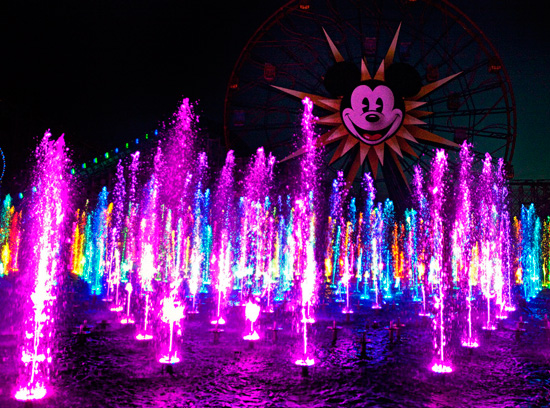 Last night marked the 1,00th show of World of Color. Since the nighttime spectacular debuted last June California Adventure has been changed forever. The show has used music, animation, color, light and water to amaze millions of guests at Disney California Adventure park.

“I am so proud that ‘World of Color’ has reached its 1,000th performance,” Steve Davison, Vice President, Parades & Spectaculars for Walt Disney Imagineering Creative Entertainment and Creative Director for “World of Color,” told the Disney Parks Blog. ”For me, one of the most exciting aspects of the show is that the technology that we developed has the flexibility to adapt and change without taking the show down for refurbishment. We’ve already had a lot of fun with the TRON tag, and we’re really excited to be introducing another new segment in time for the holidays!”On November 14th another holiday addition will join the show. A Lanny and Wayne, Santa’s techno-savvy elves from the “Prep & Landing” holiday specials will join the show.

Previous Post: Sorcerers of the Magic Kingdom Is Play-Tested at Walt Disney World